Always an anticipated matchup, this year is no different as both coaches could be coaching for their jobs.

Charlie Strong and his Longhorns started the season off with a bang, beating then No. 10 Notre Dame 50-47 in double overtime and UTEP 41-7. Since then, things haven’t gone their way, dropping games to Cal 50-43 and Oklahoma State 49-31. In Texas, mediocrity isn’t accepted, and if Strong finishes with a record at or below .500 this year, it’s hard to imagine he’ll be around next year.

Freshman quarterback Shane Buechele has been everything Texas has wanted him to be this year. In four games, Buechele has thrown for 959 yards and eight touchdowns and has added a touchdown on the ground.

The Longhorns also have an explosive running attack. Junior running back D’Onta Foreman leads the team with 436 yards and is tied for the team lead with five touchdowns. Senior quarterback Tyrone Swoopes has thrived in the Longhorns’ 18-Wheeler package, rushing for five touchdowns in red zone situations.

Bob Stoops is also in a similar situation to Strong. The Sooners are 2-2 early in the season and were very close to falling to 1-3, squeaking a win out against TCU. A loss would also push the Sooners to 2-3, and in Norman, losing to Texas is unacceptable. There’s no doubt “Big Game Bob” is a good coach, but maybe a change of scenery could do him some good. (Maybe someplace where he doesn’t need a visor?)

The Red River Rivalry will kick off at 11 a.m. Saturday.

In the only top-10 matchup of the week, this SEC battle shouldn’t disappoint.

Tennessee had a couple scares early in the season, but appear to have all the kinks worked out now beating back-to-back top-25 ranked teams in No. 19 Florida and No. 25 Georgia.

Senior quarterback Joshua Dobbs has been the MVP of the Volunteers’ offense, throwing for 1,035 yards and 18 total touchdowns. Junior running back Jalen Hurd has been solid in the backfield, rushing for 407 yards and two scores. Hurd has also caught two touchdown passes. Junior wide receiver Josh Malone and sophomore receiver Jauan Jennings have been lethal targets for Dobbs, as the two have combined for 523 yards and eight touchdowns.

This will be the third ranked team Texas A&M has faced this year, beating No. 16 UCLA in overtime and No. 17 Arkansas.

Senior quarterback Trevor Knight has been the straw that stirs the drink for the Aggies’ offense, throwing for 1,261 yards and seven touchdowns this season. The former Oklahoma Sooner has also rushed for 392 yards and six touchdowns. Freshman Trayveon Williams has been the go-to running back this year, rushing for 487 yards and four scores.

This big-time SEC battle will kick off at 2:30 p.m. Saturday.

Two ranked ACC foes face off in a matchup that could help determine who will make the ACC Championship game.

Florida State started the season 2-0, but the Seminoles’ hopes of an undefeated season went out the window with a 63-20 shellacking from No. 10 Louisville. Last week, the Seminoles lost a heartbreaker at home versus North Carolina on a field goal as time expired.

Freshman quarterback Deondre Francois has been solid in his first season, throwing for 1,323 yards and seven touchdowns. He has also added 129 yards and two scores with his legs. Junior running back Dalvin Cook has returned to his dominant ways, now with 635 yards and seven touchdowns this year, including 19 catches for 286 yards in the receiving game. Senior wide receiver Jesus Wilson leads the team in receiving yards with 340.

Miami has started the season 4-0, but have yet to face any ranked teams. This will be the first of three straight games against teams that are currently ranked in the top 25. If the Hurricanes can get past those three games, they will be in great position for an ACC Championship.

The game will kick off at 7 p.m. Saturday. 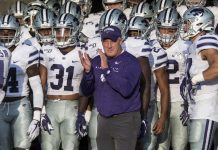 By the numbers: Setting the scene for K-State versus No. 8...