CAT communities are first-year experience and learning communities, where first-year students live together in the same residence hall with a learning assistant and take two general education courses and one connection class. In this instance, Baltrip’s Next Generation Journalism class is blended together with Mass Communications in Society and Introduction to Entrepreneurship.

Every year, the university recommends that freshmen read the common book. This year’s book was “Spare Parts” by Joshua Davis.

“(The book is about) this little hodgepodge group of guys who literally were begging for money, using PVC pipe and all kinds of stuff to put together this robot that actually worked,” Baltrip said. “It was called ‘Stinky,’ and they entered this competition. MIT was there, all these big schools that had funding, and these guys, you know, they virtually had no funding, everything was just donated and basically scrap parts and so anyway, this robot actually won.”

Baltrip said her residential learning community is responsible for reading the common book. In order to incorporate the book into the class, she said she wanted to do a hands-on activity to make it more interactive.

Taylor Luck, freshman in public relations, said she tried to think outside the box.

“After arranging the newspaper in the tin can, the hardest part was keeping the light bulb lit with the wire,” Luck said.

Baltrip said there is an underlying theory, the process of discovering innovation, where people take things and begin to imagine what can be done with them.

Richard Pitts, director of the Wonder Workshop, said some of the smartest kids have come out of the constructionist theory concept.

“The constructionist theory is the fact that you provide all the materials and let people figure things out on their own,” Pitts said. “It’s not, you know, rocket science, we’re talking about. We’re not trying to make glue or a cure for cancer here, it’s just something you can figure out for yourself. And when you figure it out, you feel enabled and then take a step further.”

Pitts did the same program for children during Black History Month. He explained how an African-American scientist, Lewis Latimer, was the reason Thomas Edison was able to have light bulbs that worked for a long time.

Sara Eskilson, freshman in mass communications, was one of the first students in the class to build a working tin-can flashlight.

Pitts said the constructionism theory applies to everyone.

“The whole idea is, you fall down in life and you get back up,” Pitts said. “You make a mistake; okay, figure out a different way.”

Baltrip said the CAT community does a lot of field trips and challenge courses over the semester.

“I was just trying to find a way to make the book come alive for the students and to kind of put themselves in a situation where you only really have parts and pieces of things and you know, how much imagination can you use to even think that what you have could be something valuable one day,” Baltrip said. 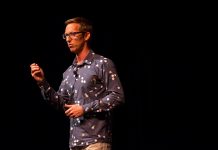