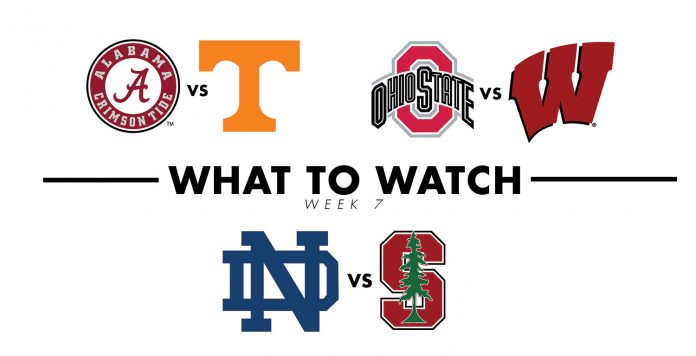 This is a big game for both teams, but especially for Tennessee, as a loss would give the Volunteers two conference losses and make it tough to get to the SEC Championship game.

The Crimson Tide has run roughshod over their opponents all year, with the only true test being a five-point win on the road at No. 19 Ole Miss. Besides that, 19 points decided the next closest game.

Freshman quarterback Jalen Hurts has proven why he was chosen the starter over the other quarterbacks. Hurts has thrown for 1,242 yards and nine touchdowns this season. He’s added 296 yards on the ground and leads the team with five rushing touchdowns.

Sophomore running back Damien Harris leads the team in rushing with 478 yards and has one touchdown. Sophomore Bo Scarbrough leads the running backs in touchdowns with four, and freshman Joshua Jacobs has added three scores. Sophomore wide receiver Calvin Ridley and junior wide receiver ArDarius Stewart have been great options to throw to all year, as the duo have combined for 52 catches, 737 yards and seven touchdowns.

Tennessee started the season 5-0, but dropped a heart-breaker to Texas A&M last week 45-38 in double overtime. If the Volunteers can upset Bama, it could be smooth sailing the rest of the way, as Tennessee currently has no ranked teams left on its schedule.

Senior quarterback Joshua Dobbs continues to do it all. He has 14 passing touchdowns and five rushing scores on the year, and added a receiving touchdown to the stat book last week. Junior running back Jalen Hurd missed last week’s game, but still leads the Volunteers in rushing with 407 yards.

Junior running back Alvin Kamara has added two scores on the ground, and has been very effective in the receiving game, leading the team with 20 receptions. Junior receiver Josh Malone and sophomore receiver Jauan Jennings have been go-to targets for Dobbs, both with 17 catches on the year. Malone leads the team with 341 yards and five touchdowns, and Jennings has added 281 yards and three scores.

At the beginning of the year, this game was supposed to feature two highly-ranked teams. Today, it features two unranked teams, but the rivalry game is still important to both teams’ seasons.

Stanford started the season 3-0, with wins over big-name schools like Kansas State, USC and UCLA. Since then, the Cardinal have fallen victim to the Washington schools as it lost to Washington 44-6 and Washington State 42-16.

Senior quarterback Ryan Burns has been less than impressive this year, throwing for 768 yards and five touchdowns compared to three interceptions. Heisman-hopeful junior running back Christian McCaffrey, too, hasn’t quite lived up to the hype yet, rushing for 520 yards and three touchdowns. McCaffrey has also only added one receiving touchdown to his totals this year.

Notre Dame has more than stumbled out of the gates; the Fighting Irish have just fallen down. The team’s 2-4 start most recently included a 10-3 loss to North Carolina State. This game could very well determine head coach Brian Kelly’s future at Notre Dame.

Junior quarterback DeShone Kizer has performed well this year, throwing for 1,621 yards and 14 touchdowns. Kizer has also added six scores on the ground to lead the team. Sophomore running back Josh Adams leads the team in rushing yards with 391. Kizer’s favorite target has been sophomore Equanimeous St. Brown, who leads the team in catches, yards and touchdowns with 28, 571 and six respectively. Senior wide receiver Torii Hunter Jr. has also been a reliable target this year with 21 catches for 290 yards.

The game for the Legends Trophy will kick off at 6:30 p.m. Saturday.

Two teams in contention for a Big 10 championship and a playoff spot square off in this top-10 matchup.

Ohio State’s opponents have been no contest for the Buckeyes, which includes a win at No. 14 Oklahoma. The closest game so far was decided by three touchdowns. A tough road is ahead though, as the Buckeyes have three games against teams currently ranked in the top 10.

Junior quarterback J.T. Barrett has been playing like a man who wants an invite to New York City for the Heisman Trophy ceremony. Barrett has thrown for 981 yards and 15 touchdowns and is also tied for the team lead with four rushing touchdowns.

Freshman running back Mike Weber leads the team in rushing yards with 566. Besides Barrett, the MVP of the Buckeye offense might be junior running back Curtis Samuel. Samuel is second on the team with 410 yards and three touchdowns. But the spot where Samuel has shined is the receiving game. He leads with team in receptions and yards with 23 and 345, respectively. He’s also caught three touchdowns.

Wisconsin has been very impressive thus far. The Badgers have beaten two top-10 teams in No. 5 LSU and No. 8 Michigan State. The only blemish on their resume is a 14-7 loss at No. 4 Michigan.

Senior Bart Houston and freshman Alex Hornibrook have split reps at quarterback, combining for 993 yards, six touchdowns and seven interceptions. Senior running back Corey Clement has been the bright spot in the Badger offense, rushing for 319 yards and five touchdowns. He is the only player on the team to rush for at least two touchdowns.

The Buckeyes and Badgers will kick off at 7 p.m. Saturday.

By the numbers: Setting the scene for K-State versus No. 8 Oklahoma