The purple of Bill Snyder Family Stadium was masked with the school colors of high schools from across the state as marching bands competed in the 30th annual Central States Marching Festival, “the premier marching band festival in the state of Kansas and the region,” according to their website, on Saturday.

Over 30 high school marching bands, big and small, competed on Wagner Field in front of their families, nationally-recognized judges and the K-State marching band.

For the Titans of Wichita South, a once-small band of fewer than 60 members, this was their first time competing at Central States.

“We have doubled in numbers over the last four years,” Jordan Brown, Wichita South band director, said. “We’re building excitement; it’s really a big deal for these kids to have the opportunity to compete at this level and get out of Wichita to see what other bands are able to do.”

Leading the Titans marching band of now just over 140 members, Morgan Farmer, junior and drum major at Wichita South, said this was a great experience for her band.

“Our band is about 40 percent freshmen, so we had to work a lot harder,” Farmer said. “To be able to have this experience with all these upper bands when we used to not be so good a few years ago is a cool feeling.”

Zachary Seckman, senior in music education and current K-State band member, said he was a member of Wichita South during their “not so good” years.

“When I was at (Wichita) South we only went to one marching festival the whole four years I was there; it was kind of a crappy marching festival,” Seckman said. “But to see something I’ve been in achieve what they just did, it just makes me poop my pants. It’s so cool to see where it’s been and what it’s becoming; it excites me tremendously.”

Farmer said she was happy with their performance and thinks that, as a whole, the band improved a lot from where they started at the beginning of the season.

For Seckman, who anticipates becoming a band director after graduation, he said it was excellent his alma mater had the opportunity to perform in front of a bigger crowd and get the critique and feedback they so desperately needed.

“That’s what I love seeing them be able to do,” Seckman said. “To get that feedback in order to grow and build as a band. As a future band director myself, that really brings a smile to my face.”

Elizabeth Owens, sophomore and flute player at Wichita South, said coming into a competition where the band knew it would be competing and critiqued at such a high standard was both exciting and nerve-wracking.

The competing bands were judged and critiqued on repertoire, performance, coordination, auxiliaries and music.

“This was the biggest competition that (Wichita) South has ever been to and there was a lot of anxiety,” Owens said. “But we were also really excited because it was kind of cool to see our band teacher have that much faith in us.”

Rachel Cluff, senior and flute player at Wichita South, said this competition was a lot bigger and different than anything she was used to.

“Usually during competitions, I am pretty level-headed and don’t get nervous, but I was super anxious walking into the stadium,” Cluff said. “Hearing the echo of us and the drum clicking just sent shivers down me. It was unreal.”

For the parents and supporters in the stands, Vickie Hollenbeck, a mom of two Titan band members, said it was easy to be supportive when you see how hard all the kids work.

“We all came here to support our kids knowing it would be a fair competition and that it is a learning experience with no favoritism of anybody else,” Hollenbeck said. “They would be critiqued as a whole and learn together from this and just be better. For their ability and their age, I think they did good.”

Becca Bishop, senior in human resource management and current K-State band member, said she once competed at Central States Marching Festival when she was at Blue Valley High School.

“It’s kind of cool to now be able to see where you started and where you are now,” Bishop said. “It’s this really cool contrast and transition you get to see.

In addition to Bishop, Alaysha Monk, sophomore in chemical engineering and current K-State band member, said she has also witnessed a lot of personal growth being on the other side of the competition since she competed at Central States when she attended Derby High School.

“I still remember when I heard the Wabash (Cannonball) played for the first time here and learning how to do it,” Monk said. “It was really special. There’s been so much growth since then.”

Also a current K-State band member who competed at Central States, Luke Augustine, senior in civil engineering, said it was being able to compete at K-State every year that made his decision to apply to K-State an easy one.

“It was a great way to see what we can aspire to; that was a really cool thing during high school,” Augustine said. “After coming to this event year after year it really solidified that I wanted to come here and I wanted to be a part of the K-State marching band.”

Outside of the marching band competition, the high school bands had the opportunity to partake in clinic sessions, watch their video critiques while hearing from judges and experience a show performed by The Pride of Wildcat Land and The Boston Brass. 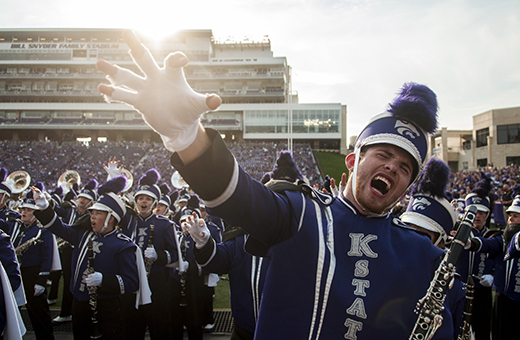 Pride of Wildcat Land: Marching as a family