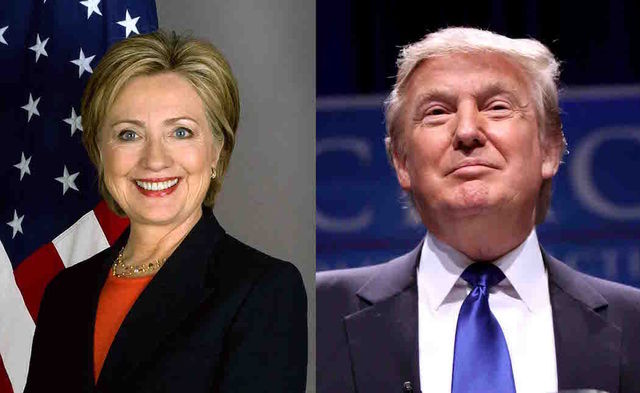 On Wednesday evening, presidential candidates Democrat Hillary Clinton and Republican Donald Trump took the University of Nevada stage in Las Vegas, Nevada, to partake in the last of the three debates preceding the Nov. 8 election.

Early on, the candidates were asked about their respective stances on women’s rights, particularly related to abortion.

“I will defend Roe v. Wade and I will defend women’s rights to make their own healthcare decisions,” Clinton said. “We have come too far to have that turn back now.”

Trump expressed disagreement with Clinton’s stance on women who have late-term abortions in life-threatening situations.

Clinton called Trump’s stance on abortion “scare rhetoric” in response to the statement.

“Well that is not what happens in these cases, and using that kind of scare rhetoric is just terribly unfortunate,” Clinton said. “You should meet with some of the women that I’ve met with—women I’ve known over the course of my life. This is one of the worst possible choices that any woman and her family has to make, and I do not believe the government should be making.”

When the conversation shifted to Russia and Vladmir Putin, Clinton criticized Trump’s refusal to say Russia was involved with the WikiLeaks hack of her campaign emails, for which both candidates have been personally briefed by government intelligence officials.

“You continue to get help from him because he has a very clear favorite in this race,” Clinton said of Putin. “So I think this is such an unprecedented situation, we’ve never had a foreign government trying to interfere in our election.”

“She doesn’t like Putin because Putin has outsmarted her at every step of the way,” Trump said.

When asked about his recent stances on his belief that the election is rigged, Trump refused to say whether he’ll accept the ultimate outcome of the election.

“I’ll tell you at the time, I’ll keep you in suspense,” Trump said.

Lucas Barta, sophomore in finance, found both the debate and current election process to be part of a fixed system.

”I’m a Trump fan because he’s not a regular politician,” Barta said, “Hillary has the advantage so far and I’m not too happy about it. The debates are rigged sometimes, Hillary had an earpiece on at the debate awhile back. The election in general is a bit rigged. But one of them is about to become president regardless of what happens.”

Overall, student reaction to the debate was mixed.

Samuel Hoffman, junior in psychology, said he felt the third debate was less hostile because of the current end-stage of the election.

“They’re realizing that this point of the election is more critical than ever and that it’s time to present the ideas of what they actually intend to do, and not attack each other as much like they’ve done so far in the previous debates,” Hoffman said. “It’s time to change peoples’ minds.”

Abigail Hughes, freshman in geography, said she has not found the debates to be an influential force in voting decisions.

“This is my first election that I’ll be able to vote and it’s been disappointing to see such immature, out-there candidates,” Hughes said. “I’m considering not even voting. At this point I’m not sure that the debates have helped decisions. I think people are just looking hard for some sort of appeal from either of the two people who might be running the country very soon.”

In the national polls, Clinton’s lead has steadily climbed since the first debate. The New York Times reported that based on national polling averages, Clinton leads Trump by a margin of 6 percentage points.

Debate moderator Chris Wallace, a Fox News television host, asked candidates to finish the debate in a “positive” light. Clinton and Trump were given the opportunity to provide a closing statement.

“I’m reaching out to all Americans—Democrats, Republicans, and independents,” Clinton said. “We need everybody to help make our country what it should be. We need your talents, your skills, your commitment, your energy, your ambition. I will do everything I can to make sure you have good jobs with rising incomes, that your kids have good educations from preschool through college. I hope you will give me a chance to serve as your president.”

OPINION: Advance voting is a college student’s friend this election

The national election will take place on Nov. 8. There is advance voting available in the K-State Student Union.
Advertisement