Harold Trick, professor in the department of plant pathology, said he came to Kansas State in 1998 with the goal to bring biotechnology to the university.

Since then, he and other professors in the department have not only spent time educating students about the use of biotechnology to improve plants, but have also dedicated a large portion of their time to research.

“Ninety percent of my time is research, 10 percent is teaching,” Trick said. “On the research side, I try to use biotechnology as a tool to improve crops.”

When Trick originally came to K-State, he said he spent his time collaborating with numerous people on genetic engineering projects where they wanted to stick various genes into plants, but over time, he has developed his own niche.

“I developed my own interest in trying to find resistance to soybean cyst nematode,” Trick said.

Soybeans, which bring in approximately $37 billion each year, are the second-largest crop in the U.S. Although, nematode parasites have had a history of plaguing the crops, which is what both Trick and Tim Todd, instructor of plant pathology, are trying to fight back against, according to Tiffany Roney’s K-State News article, “Environmentally friendly invention may save soybean industry millions of dollars per year.”

Todd said he currently works with soybean breeders with conventional resistance to the soybean cyst nematode but is collaborating with Trick to develop transgenic resistance, where genes are artificially introduced into the plant’s genetic makeup.

“We’re working to get that into a soybean line with the idea being that it’ll be more durable than the conventional resistance that we have now,” Todd said.

A nematode is a parasite that feeds on the roots of the soybean, drawing the nutrients from the plant and reducing the vigor of the plant. This, in turn, reduces crop yields. Trick and Todd have been trying to figure out how to prevent such nematode from doing its damage, Trick said.

“One of the ways that we found was that we can produce small molecules in the soybean plant so that when the nematode starts feeding on it, these molecules will go into the nematode and will turn off specific genes in the nematode itself,” Trick said. “If those genes are important in the overall fitness, you will kill the nematode.”

On top of silencing essential genes within the nematode, the pair said they’ve also designed the molecules so that they will reduce the fertility of the nematode.

This use of biotechnology that will help the soybeans resist the nematodes could save the soybean industry millions of dollars per year.

“He brings an expertise that actually allows us to make progress in a way that we couldn’t do before,” Todd said.

Along with the parasitic issues surrounding soybeans, Trick said he also realizes wheat is an important crop to Kansas that also has issues he believes could be improved upon.

“Maybe it’s too hot so we potentially have genes that will make the wheat grow better in warmer temperatures,” Trick said.

In his research regarding wheat crops, Trick said he works closely with John Fellers, an adjunct associate professor in the plant pathology department as well as part of the research and development branch of the U.S. Department of Agriculture.

Fellers said he and Trick have known each other for years, as they worked together on a proposal during graduate school.

Feller said when working in a research department, it’s almost like an assembly line when collaborating with others because everybody can’t do everything.

Fellers said one of the techniques Trick uses to do this in his transgenic lab is through a gene gun.

Trick can essentially take pieces of DNA and, through helium pressure, can blast these particles into the plant cells. The particles then get into the nucleus and integrate into the chromosome. Through this technique, they can regrow a plant and have it undergo various tests, according to Fellers.

Fellers said it’s not only Trick’s love for his research but also his knowledge about its overall purpose for the world that makes him such a valuable asset to K-State.

Trick said there will be nearly 9 billion people on Earth by 2050, and we’re going to have to figure out how to feed everyone.

“We’ve got to look at different ways of doing this, whether we put in new genes that make the plants more resistant to drought or we put in less fertilizer on the ground so it doesn’t pollute our environment,” Fellers said.

Fellers said they want to make the plant more efficient with the tools that it already has. He said he looks at the matter like a Prius — it’s a smaller car, but it’s doing so much with so little.

“Yes it’s still a car, but it’s much more efficient,” Fellers said. “That’s what we’re trying to do with plants.” 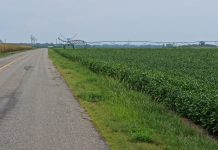 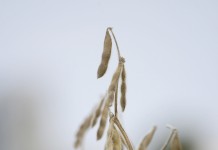 Harvested beans have ‘soy’ many uses

Harvested beans have ‘soy’ many uses