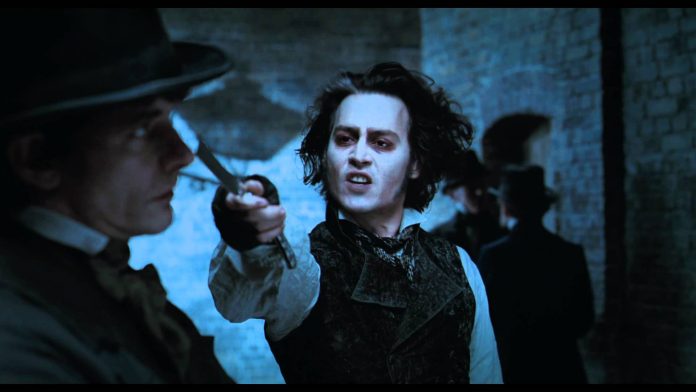 Warning: This is a musical.

For those of you who (incorrectly) think musicals are awful, “Sweeney Todd” might not be the movie for you, especially since I, a musical lover, had a hard time with it at times.

Welcome Johnny Depp and the cast of “Harry Potter” for this musical. Depp doesn’t disappoint with his ability to play slightly unhinged characters, and Helena Bonham Carter plays Mrs. Lovett, an interesting accomplice to the murders in the musical. Probably the highlight of it all for me was seeing Alan Rickman (aka Severus Snape) in a powdered wig.

Probably the hardest part to get through with this movie was the repetitiveness of the music. Even if the instrumentals provided a good sense of tone, the beat of what was actually being sung was very repetitive. As much as I would have liked to see some more variation in the musical score, I couldn’t say it really made the movie boring because there was enough madness and gore to make it perfect for Halloween-time.

I’ve never understood how men could go to a barber shop and trust someone with a razor to their neck, and with movies like “Sweeney Todd” out there, I have to wonder at their sanity. Sweeney Todd is a barber out for revenge for his lost wife and daughter. Like any rational person, he goes on a killing spree with some musical numbers thrown in for fun, his victims being any poor fool who sat in his chair for a shave.

Though the blood looked extremely fake — it was actually more pink than anything else — I don’t think it really detracted from the overall movie. There might have been a lot of gore and throat slashing, flesh grinding and cannibalism, but that wasn’t the whole point of the musical. It was revenge and a mental journey for Sweeney and Mrs. Lovett, who despite being crazy in her own way, actually wasn’t all that murderous — just very practical.

The character development is pretty fantastic. I loved how there were flashbacks toward the beginning of the movie. After that, it wasn’t important to really get more back story. The driving force of the movie was Sweeney’s desire to murder the judge who wrongfully accused him of some crime and sent him away for 15 years.

Without giving anything away, there was a plot twist that was kind of anticipated but still a decent surprise involving the beggar woman and Mrs. Lovett, which adds a level of depth to Mrs. Lovett’s character as well as a tragic ending to Sweeney Todd’s story.

So maybe the music wasn’t that fantastic, but the plot and characters were still epic. It might not be jump-out-of-your-skin scary, but it was creepy and gross, keeping with the theme of Halloween.

Chilling out: Fall activities provide comfort for students away from home