Andrew Bennett, professor and head of the mathematics department as well as president of the Faculty Senate, said he has taken pleasure in aiding students and faculty alike over the years.

Colleagues like Brian Lindshield, associate professor in the College of Human Ecology, has worked with Bennett on Faculty Senate and as co-developer with him for the Open/Alternative Textbook Initiative.

Lindshield said Bennett’s quirky personality paired with his innovative thinking and communication skills are the reasons for his success in leading the department.

Bennett said he became department head in 2013 when his predecessor wanted to retire after 20 years on the job. Since being put in the position, Bennett said he enjoys being able to make problems for students and faculty disappear in order to enhance their learning and teaching the most.

“As department head, I’m in a position to help fix things, say ‘yes we can make that happen’ or set something up where people are more successful,” Bennett said.

Ian Manly, graduate student in the math department, said he has really stepped up to the position and made a positive impact.

Since Bennett has been at Kansas State for 28 years, his colleagues have noted that his overall understanding of the university has proven helpful in some of his tasks as department head.

“He knows the university structure, how money flows and how to gain resources for the department,” Tom Muenzenberger, associate professor of mathematics, said.

Muenzenberger said Bennett’s large amount of ties around the university, both inside and outside of the department, have aided him in accomplishing his goals.

“He not only understands and appreciates mathematics but also a wide variety of other disciplines,” Lindshield said. “He also has deep institutional knowledge and relationships that he’s able to utilize to represent the math department.”

Despite all that he’s done for the department, Bennett said he wouldn’t be as successful if it weren’t for his colleagues and students. For example, he said the highlight of his professional career, being awarded the National Teaching Award by the Mathematical Association of America, was due to a faculty member nominating him.

“They weren’t mathematicians, but I grew up in a household where the most important thing you could do is get an education and why would I not want to then make education my career,” Bennett said. “The more education you got, the better, so I wanted to be at the highest level.”

Bennett said he grew up always liking math, simply because it works. He quoted Galileo saying, “Mathematics is the language with which God has written the universe.”

Bennett also said “you can understand the world as a reflection of that.”

Despite sharing his love for math at K-State for the past 28 years, Bennett said he almost didn’t end up here. When he was finishing a post-doctoral position, Bennett said he had been told that he would receive an offer for a position at the University of Arkansas, but K-State’s math department head at the time called him and asked him to come to Manhattan for an interview.

“I very nearly said no,” Bennett said. “I knew people at Arkansas and I had been told that I was getting an offer there.”

After taking into consideration that he had nothing in writing from Arkansas and that he would feel like a fool if something were to go wrong; Bennett said he turned down the Arkansas interview and made the trip to K-State.

“I came up here and just fell in love with the place and the department,” Bennett said. “I came back and told my wife I thought we would be happier in Manhattan.”

After sharing with his wife his sudden decision as to where they would be living, he moved to Manhattan and said he is still very happy here nearly three decades later. 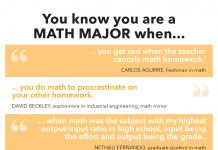 “You know you are a math major when…

“You know you are a math major when…