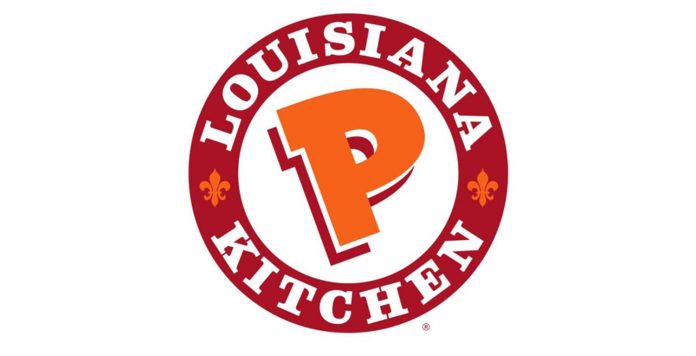 After months of anticipation, a new building rose in an empty lot on Bluemont Avenue that once was the home to an Arby’s restaurant. Now that spot is the home to Manhattan’s first-ever Popeyes Louisiana Kitchen. Popeyes offers everything from fried chicken and chicken tenders, to sandwiches and seafood.

The buzz was around the Manhattan community for a long time as many chicken lovers awaited for the day Popeyes would open its doors. And on Wednesday, those doors opened.

The Collegian’s editor-in-chief Tim Everson and contributing sports writer Riley Gates ventured down to Popeyes to see how this chicken stacks up against the rest of the competition. The results were as hoped and the guys wanted to share their thoughts with their fellow students.

Riley: We both ordered the four-piece fried chicken combo. I’m all about trying new things, but sometimes my wall pops up, and I go with the safe bet. That being the case, I decided to go with the mild over the spicy, although I did try a spicy piece. After one bite, I realized I found my new go-to chicken place. It was the perfect balance of hot, but not too hot, and crunchy on the outside, but not too crunchy.

I went with a mix of dark and light meat so I could try both, but I would suggest you get a full-order of dark. I know that light meat is, “healthier,” but you’re eating fried chicken, so you’ve kind of thrown health out the window by this point.

The meat was juicy and the spice was present but not strong enough to make it uncomfortable. It definitely was not an entree for a health nut as it came with a fair share of grease but hey, if I wanted to be healthy I would’ve stayed home and ate a salad.

It sounds like a bit of a cop-out answer, but I’m honestly 50-50 on these mashed potatoes. I really like the flavor and uniqueness that the cajun gravy provides, but at the same time, I usually stick to butter on my mashed potatoes. They did not blow me away, but they also did not scare me away.

Tim: Out of the many sides that Popeyes offers, I also went with the mashed potatoes and gravy. I was blown away, once again, by the quality. The potatoes were creamy and the gravy was different in the best way possible.

It was a thin brown gravy that had an extra cajun kick, which really brought the house down for me. Normally I’m a white cream gravy guy through and through, but Popeyes opened by eyes to gravys of all colors and creeds.

Riley: I entered this meal knowing there would be a biscuit to complete it. I also entered this meal with the thought that there was not a fast food biscuit available that could top what you get at KFC. So when I bit into the Popeyes biscuit, I was blown away.

I hate dry biscuits. They’re the worst. And biscuits usually fall apart, so when you try to butter them, they crumble. These biscuits had a butter flavor already in them without having to add any butter, while also not overpowering you with too much butter. Needless to say, I’ve been proven wrong and Popeyes now takes the throne for best fast food biscuit.

Tim: Maybe my favorite part of the meal. I’m not as much of a KFC biscuit believer as Riley so I came in with no loyalties on the matter. Popeyes’ biscuits are fluffy, salty and fantastic. Throw some butter and honey on there and you’re in gluten heaven.

There were so good that when I return, I’ll be ordering an extra biscuit or two.

Riley: Sometimes you can build up things in your head before you experience them. So I had anticipated my Popeyes’ experience to let me down, since I had built it up so much in my head. This was far from the truth. I was absolutely blown away by Popeyes and am already looking ahead to my next visit.

Tim: In my mind, there is now only one fast food chicken place in town and that’s Popeyes. I look forward to going back (soon) and checking out other parts of the menu. Even wading through massive opening day lines didn’t hurt my experience. Chicken nirvana has arrived.