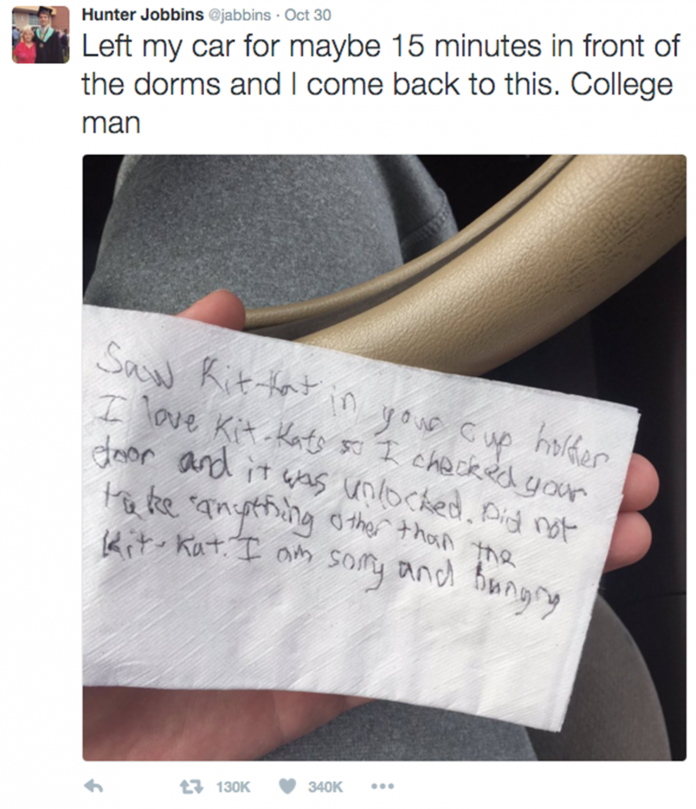 A TWEET from Hunter Jobbins, sophomore in athletic training, about a stolen Kit Kat Sunday received more than 100,000 retweets and 300,000 likes. The thief’s note said in part, “I am sorry and hungry.” The official Kit Kat Twitter account offered to replace Jobbins’ candy bar.

OCTOBER CRIME statistics for Manhattan show there were 23 burglaries from motor vehicles. There were also 59 alcohol violations, 19 DUIs and 175 traffic incidents, among other statistics. The numbers come from Oct. 1-31 data on the LexisNexis Community Crime Map, which comes directly from the Riley County Police Department.

A PETITION on Change.org calling on the USD 383 Manhattan-Ogden school board to keep the high school mascot has more than 2,000 signatures. Lindsay Elliott, Manhattan resident, started the petition. ReImageMHK is pushing for the mascot’s change.

BALLOT SELFIES are legal in Kansas, according to a Kansas Secretary of State official. Under state law, disclosing the contents of a ballot is a felony, but elections director Bryan Caskey said the law applies only to election officials and not voters, according to KSNT.

AN ARMY VETERAN is suing American Airlines for an incident at the Manhattan Regional Airport, according to the Washington Post. Lisa McCombs, an Army veteran who suffers from PTSD, was barred from boarding a flight with her service dog.

THREE PEOPLE were found dead outside a home near Hesston Sunday, according to USA Today. An 18-month-old baby was found alive inside the home. Police are searching for a suspect.

FEDERAL PROSECUTORS allegedly waited until 10 minutes before a detention hearing to share their evidence with the defense attorney of a man accused of plotting to bomb a Garden City apartment complex that was home to more than 100 Somali immigrants, according to KSNT.