If university students had their way, Hillary Clinton would win the election, according to a nationwide survey conducted by students at the University of Oklahoma.

The survey, which closed on Oct. 16, asked students from more than 100 universities and colleges across the country about their preferences in the 2016 election for OUCovers16, a political journalism research project on millennial voters.

Since the data is a convenience sample — and as such is not a probability sample collected in a random fashion — the results of the survey are representative of the people who answered, but might not be reflective of the entire generation.

The Collegian filtered the raw data of the survey down to the 1,015 respondents who completed the entire survey and are current students, registered to vote and between ages 18 and 24.

The survey asked, “Which of the following best describes your vote choice?”

The options given, along with the results, were:

Seven of the respondents attend Kansas State, and there was exactly one vote for each one of the seven categories of answers. Ten University of Kansas students completed the survey, where six responded “I don’t want Hillary Clinton, but I am voting for her.”

The number of advanced ballots cast in Riley County this year is up by one-third over the 2012 presidential election.

According to a tweet Monday morning from the Kansas Secretary of State office, there were 468,032 advanced votes cast statewide, compared to 333,795 in 2012.

Follow the Collegian, 91.9 KSDB-FM and Channel 8 News today as we collaborate on election day coverage. Polls are open from 7 a.m. to 7 p.m. 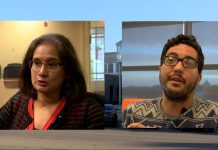 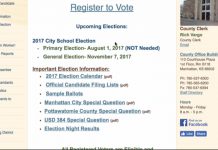 CH8: How to register to vote in future Riley County elections

Snyder runs for president: ‘Opportunity for the greatest turnaround in American...