Student Governing Association officers do not serve for free. Each year, around $50,000 of student privilege fee dollars is used to compensate the students serving the Kansas State student body.

According to SGA’s Joint Committee on Officers’ Compensation Report and Recommendations, in fiscal year 2016, a total of $57,184 was used to fund 13 student leaders.

Other student officer positions and their compensation as a percentage of in-state tuition are listed within the graphic accompanying this article.

The following roles also received scholarships and compensation by the following percentages of K-State in-state tuition:

Jessica Van Ranken, student body president and senior in political science, said she thinks the reasoning behind providing scholarships and compensation is to ensure that financial issues do not prevent student leaders from taking these leadership roles.

“Student leaders in these positions spend a lot of time on their work serving their fellow students in their role and sometimes that may hinder their ability to have outside jobs,” Van Ranken said. “Part of the goal is to make these roles accessible to students who may need to hold a job if it weren’t for this type of compensation. It also serves as an incentive to run if you know having this position allows for you to serve well in that role and not be hindered by other part-time job responsibilities.”

Jonathan Peuchen, privilege fee chair and junior in mechanical engineering, said compensations open the door to people who would not be able to give their role the time commitment it requires without some type of compensation.

“If there’s someone who has trouble with school finances, we want people to be able to pursue opportunities of leadership within the student body regardless of their financial status,” Peuchen said. “This is one thing that breaks that barrier to entry for someone who would forgo their talents in a student leadership position in favor of spending that time in a student job.”

In the SGA officer applications and filing forms of 2016-17, as well as on SGA’s website, the compensation and scholarship amounts are not mentioned.

“The discussions we’ve had is that nobody knows about the compensation, but the thing is, is we don’t want that to be a barrier to entry,” Peuchen said. “A lot of people don’t know about this and that is 100 percent true.”

Peuchen said he first found out about the compensation after he was elected to serve as the governmental relations chair and a scholarship showed up on his KSIS account.

“I was like, ‘Well where’d that come from?’” Peuchen said. “I asked Andrew (his twin brother and a student senator) if he got it, thinking maybe it was something for being a senator, not even realizing it was for the chairs.”

Van Ranken said she also did not know about compensations when she first joined SGA.

“I know personally in my freshman year of student government involvement, the last time this compensation package was reviewed, I remember being surprised because I was like, ‘Oh, I thought everyone just did these roles (without compensation),’” Van Ranken said.

Chance Hunley, a former officer in SGA and senior in agricultural communications and journalism, said he did not know there was compensation for some leaders of the legislative branch when he first applied for parliamentarian.

“I was aware when I applied for senate operations chair, but I was more motivated by the role of the position than the compensation,” Hunley said.

Every three years, SGA’s joint committee on officers’ compensation re-evaluates the compensations and creates a recommendation for the next three fiscal years.

Van Ranken said she believes the reasoning for cutting the compensations for those chair positions and the intern coordinator position is because the 10 percent they currently receive is not enough to motivate people to apply, so it was not a prudent use of student fees.

“A lot of people may not even know that is part of the deal when they are applying for those positions,” Van Ranken said. “It clearly didn’t incentivize them, so they didn’t feel it was a prudent use of student dollars to keep those scholarship packages the way they were.”

“It is very difficult to stop this report based on the timeline put in there,” Peuchen said. “If student senate does nothing, the report gets approved and that’s how it is going to be. So that is why you’re seeing the disapproval of the JCOC recommendation.”

According to the disapproval of the joint committee on officers’ compensation salary recommendation bill that will be debated Thursday in the student senate, SGA disapproves of the set of salary recommendations because the committee did not necessarily take into account the work an SGA officer will often perform. The committee only compared compensation between Big 12 student governments—which have a different governance structure—and the report had inconsistencies.

“A group of us in senate didn’t feel the recommendation of the JCOC committee necessarily reflected the direction that student senate and all of SGA is wanting to go in the future,” Peuchen said. “One thing that (the authors of the disapproval) are unanimously together on is we didn’t think this report was the right direction. Now also, none of us know what the right direction is, but we all agree this is not it.”

Peuchen said he thinks it would be difficult to expect high-quality leaders in those positions if compensation was no longer available.

“I think it’s difficult to cut those three chairs and the intern position and expect the duties of those positions to be filled with the same high quality that we have seen in the past,” Peuchen said.

Historically, Peuchen said, the senate parliamentarian and secretary have been the hardest roles to fill and they are the two officers on the legislative branch who are not compensated.

“I feel that for the senate operations chair or governmental relations chair, those positions will be particularly difficult to fill if there’s no compensation,” Peuchen said. 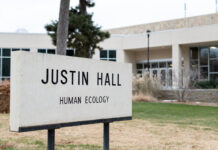 McDermott, Abounabhan ‘pushed back’ during primary elections with no prior SGA...