It’s strange when one chapter of your life comes to a close. You look anxiously toward the beginning of a new chapter, and yet you’re also not quite sure if you are ready for this one to end.

At least, that’s how I feel today.

Today I will wear a purple plume with all of the graduating seniors, while the rest of the Kansas State marching band wears white. I will be recognized in front of a sea of purple, and then I will sprint back to the 5-yard line to march my last halftime show in Bill Snyder Family Stadium.

Last. It’s such a weird word to say when this day felt so far off not too long ago.

I remember calling my dad after my first day of band camp freshman year, and saying “I think I know what boot camp feels like now.” He laughed, and I’ve survived five band camps since then.

Now here I am, tearing up as I think about the next time I will be in Bill Snyder Family Stadium, when I’ll have to watch the game from a different section in normal clothes instead of a uniform, and I’ll have to cheer on the band from the sidelines instead of performing on the field.

These tears aren’t just sad ones, though. They’re also happy ones, because some of my favorite college memories were made with this band.

I met my best friend on the first day of band camp my rookie year. We were practically attached at the hip through four years of band together.

I watched fans rush the field when K-State was named Big 12 Champions in 2012, only staying in my seat because Dr. Frank Tracz told us to. I still get chills when I think of the roar of the crowd as we finished the Les Mis show at the Buffalo Wild Wings Bowl in 2013.

I remember the excitement of learning we had won the Sudler Trophy; the pressure and exhilaration of performing during Sudler Season. I still can’t believe we actually scrolled “Star Wars.”

I stuck around for a fifth year, not just to graduate, but to perform in the Sudler Encore season, to experience a brand-new section of the stadium dedicated just to the Pride of Wildcat Land and most importantly, to earn that fifth-year marching band ring.

Words cannot express how much I appreciate and respect Dr. Tracz, and how much he has done for me these past five years. All of the high-fives, the jokes, the pep talks and even the tirades. If I’ve learned anything from marching band, it’s when the going gets tough, the tough push through it. 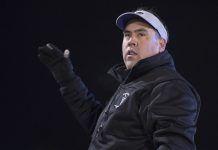