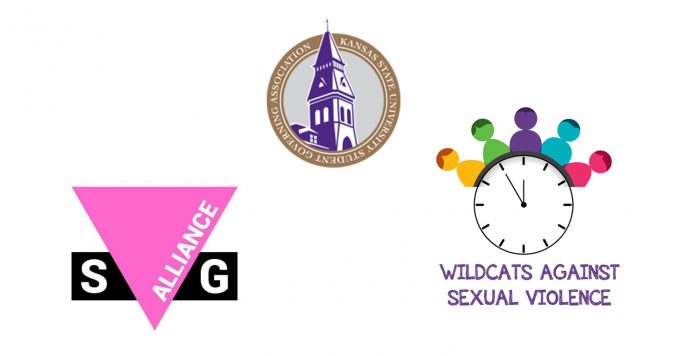 After a former Kansas State student and the third off-campus rape victim joined one of two Title IX lawsuits against K-State, student leaders of various organizations spoke out about K-State’s policies on off-campus sexual assaults and the response — or lack thereof — of the university and Student Governing Association leaders.

Wildcats Against Sexual Violence, a student-led organization with a goal of “making K-State a more survivor-centered campus through policy change, education and prevention,” released a statement on its Facebook page Tuesday morning.

“Sadly, this news does not come as a shock,” the release stated in reaction to the fact that Jared Girhing, a former K-State student, has been charged with the rape of two K-State students over a year apart.

“The reason that we were saddened, but not shocked, that another student had been raped by the same perpetrator and that the university failed to respond to that is because we know by working in this realm and through statistics that only 6 percent of men are rapists, but of that 6 percent, each individual commits an average of 5.8 assaults,” Emma Barnett, president of Wildcats Against Sexual Violence, SGA senator and senior in political science, said.

Barnett said she believes that had K-State investigated and adjudicated those two assaults and expelled the perpetrators, the third rape would not have occurred.

“That is really sad, especially since we know those rapes took place about a year apart,” Barnett said. “Within a year, K-State could have done a very thorough investigation of those perpetrators and done something about it.”

According to the release, Wildcats Against Sexual Violence does not believe the university is in compliance with Title IX.

Barnett said the university has been misleading by informing students they process all sexual assault claims, but that does not necessarily mean they will investigate or adjudicate those claims, especially if they occurred off campus.

“We want to see all cases of assault be investigated,” Barnett said. “Right now, K-State says, ‘Well, we’ll investigate if those students are harassed on campus or are threatened on campus by their perpetrator.’ But it shouldn’t have to come to that. When a student experiences trauma off campus, that is going to affect their education. It’s going to affect where they feel safe on campus and how safe they feel.”

“We want to see student leaders taking a firm stance against sexual violence and taking a firm stance against these policies,” Barnett said. “And I think it’s gone back and forth. We’ve passed a resolution in senate last semester that suggested changing this policy to investigate off-campus and now there’s been statements by student leaders that go back and forth with just waiting to see what the courts decide or ‘We’ll just support K-State.’”

In SGA’s most recent statement released Monday, Jessica Van Ranken, student body president and senior in political science, and Trenton Kennedy, student body vice president and junior in entrepreneurship, said, “We will continue to follow developments in the current lawsuits against Kansas State University and we will await a decision from the court of law in regard to the university’s policies concerning the investigation of sexual violence off campus.”

Zach Lowry, president of K-State’s Interfraternity Council, SGA senator and senior in political science, said he is disappointed in SGA’s leaders, as well as K-State.

Lowry said the Interfraternity Council has been working for more than two years with the Panhellenic Council to collaborate with K-State administration in requesting a change in its policy of how it deals with off-campus sexual assaults.

“Our resolution is really simple,” Lowry said. “We just wanted K-State to begin investigating off-campus sexual assault like they do on-campus, so like the same way they would investigate a sexual assault in the residence halls.”

Lowry said the Interfraternity Council has been working on initiating that change, but neither the university nor SGA has been willing to help.

“We requested that for the last two years and the university has really blown us off,” Lowry said. “They had said they would get back to us and never did. So the second year we tried and asked again and no progress was made.”

In the spring, when the first two lawsuits came to light, Lowry said because of all the attention the policy was finally getting, the Interfraternity Council decided to get more involved and continued to push for a change by holding a rally and creating a petition for a change in university policy.

Lowry said they received more than 1,300 signatures, even without the support he had requested from SGA.

“Honestly, I’m kind of disappointed in our student government leaders,” Lowry said. “When I was putting on the rally last spring, I asked the leadership if they would co-sponsor the rally with me and help with (public relations) and they just decided that wasn’t in their best interest and said that wasn’t part of their agenda.”

“I honestly think they just didn’t want to hurt their chances of getting things done with the university (administration) by protesting them,” Lowry continued. “So that was really disappointing for me. I was really hoping they would take a strong stance, but you know it’s just something they have not gotten behind.”

Lowry said it is frustrating to see that SGA leaders did not publicly state that they want a change in this policy, even after Van Ranken had told the Senate at their April 22 meeting that, “We want to make it clear that we support a change in the university policy to adjudicate off-campus sexual misconduct.”

As reported Tuesday by the Collegian, when Van Ranken was asked about this change, she replied, “If pending court decisions were to change the situation, then we would work with administration to advocate for student interests during a policy change process.”

Lowry said it would have been nice to see the leadership actually want to make this change.

“I think that’s really disappointing of them,” Lowry said. “They know what the right thing to do is, and waiting it out for the court, that’s not really taking a stance and leading. I would hope that they would change their mind on that.”

Holly Nelson, president of K-State’s Sexuality and Gender Alliance and junior in anthropology, said her and the alliance are working to make campus and the places they belong to better for those who face sexual violence, but there is an issue on the administrative level.

“There needs to be something done with where (administration) keeps saying they can’t do something about these issues even though it affects our learning environment and it affects our safety on campus,” Nelson said. “The main issue with this case in particular is the university keeps saying they can’t do anything and I feel like they have an obligation to provide what they said they would to these victims.”

Nelson said the lack of action from the university is making a hostile learning environment at K-State for students who are victims of sexual assault.

“There needs to be some kind of intervention done by the university to ensure they are providing a safe learning environment for people,” Nelson said.