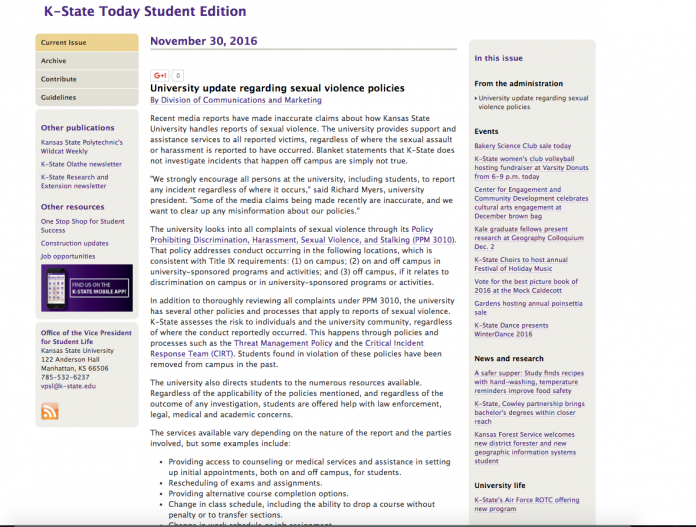 Earlier this week, more information came out about one of the two public lawsuits Kansas State currently faces regarding administrators’ refusal to investigate alleged off-campus rapes.

The university was quick to go on the defensive with a published press release on Wednesday. It’s only fair to take it apart piece by piece and give context to the situation.

Which media? Was it the Associated Press, the Collegian, BuzzFeed, KSDB, the Manhattan Mercury or KMAN? Blanket statements like this are meant to generate sympathy for the university by painting every news organization as “the media” without specifying which one exactly was inaccurate in its reporting. Wouldn’t it be great if all of us could blame the media when we make a mistake at work?

“The university provides support and assistance services to all reported victims, regardless of where the sexual assault or harassment is reported to have occurred.”

Define support. According to an interview with BuzzFeed, Danielle Dempsey-Swopes, a former investigator at K-State, said the university’s general counsel staff told her not to investigate off-campus rapes for fear that it would create liability concerns.

“Blanket statements that K-State does not investigate incidents that happen off campus are simply not true.”

Funny how the university mentions blanket statements and opens its press release with one.

“We strongly encourage all persons at the university, including students, to report any incident regardless of where it occurs,” said Richard Myers, university president. “Some of the media claims being made recently are inaccurate, and we want to clear up any misinformation about our policies.”

Logback did not elaborate on what claims were true or false, only that the university would not comment further since the lawsuits are still ongoing. Apparently, the ongoing lawsuits didn’t prevent the university from making a press release.

This is the heart of the matter. The alleged rapes took place off campus at events that were not university-sponsored. K-State administration argues it is therefore not responsible for investigation of any involved students in accordance with the law.

In April 2014, however, the U.S. Department of Education sent a letter to all federally funded colleges and universities stating that, under Title IX, schools must investigate reported incidents of sexual violence against students.

Rather than live up to this legal requirement, K-State had a Baylor moment. When deciding upon what was ethical and what was legal, the administration decided upon what was profitable. It’s hard to get people to enroll in your university and convince alumni to give you money if you’re known for having several occurrences of rape.

“K-State assesses the risk to individuals and the university community, regardless of where the conduct reportedly occurred. This happens through policies and processes such as the Threat Management Policy and the Critical Incident Response Team (CIRT). Students found in violation of these policies have been removed from campus in the past.”

We’ll just have to take administrators at their word about the removals. When the Collegian requested records of past sexual assault investigations in the last two years, the university replied that it would cost almost $1,400 to retrieve them.

Aside from the public lawsuits K-State faces, it is also contending with four federal investigations into Title IX violations. These facts leave doubt in the mind about just how thoroughly the university has investigated reported sexual abuses both on and off campus.

“Additionally, K-State provides advocates for reported victims through the Center for Advocacy, Response, and Education (CARE). These advocates provide confidential services and advocacy for K-State students who have been affected by sexual violence, stalking or harassment. They inform reported victims of options, as well as coordinate support and resources if requested by reported victims.”

Former student Crystal Stroup, the latest rape victim to step forward, stated in her lawsuit that CARE did not offer her such options. Since the university can apparently only make blanket statements and not respond to specific allegations, we’ll have to wait for trial to see if administration is being honest about this.

Rather than release a statement that would allay concerns about the safety of students, the university instead chose to publish a highly defensive press release that served no purpose other than to cast blame on unspecified sources.

The administration’s flippant response to a serious matter deserves an equal response from the K-State family. Furthermore, it’s evident that the community must do more to help prevent rapes from occurring and create a safer environment for victims to report these incidents because the university won’t.