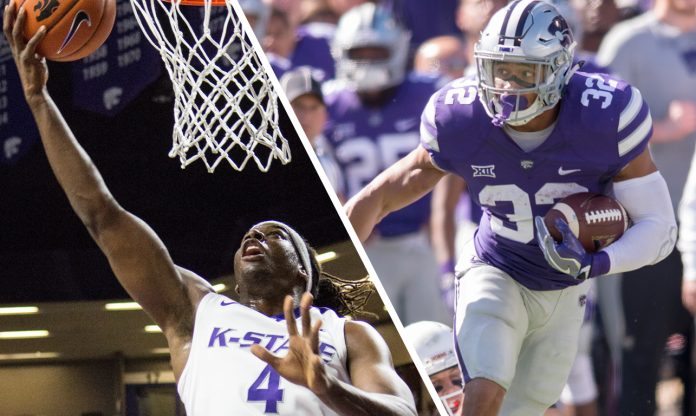 Kansas State teams went two out of three on Saturday. The volleyball team came up just short, but the football and men’s basketball teams won in style.

The football team got Saturday off to a great start, albeit in terrible conditions. K-State went into cold and rainy Fort Worth, Texas, with the opportunity to win its eighth game and a fourth place Big 12 finish. The Wildcats did just that, in the 30-6 victory.

The Wildcats won this game like they have won so many this year: with their legs. Junior quarterback Jesse Ertz and sophomore running back Justin Silmon were a two-headed monster on the ground.

Ertz ran for 170 yards and a touchdown, and Silmon rushed for 133 and two touchdowns. It was the sixth straight game the Wildcats have rushed for more than 200 yards and it brought Ertz’s season total to 945 yards. He could be the first 1,000-yard rusher since running back John Hubert in 2013.

“He’s done this virtually all year,” head coach Bill Snyder said to media after the game. “The thing about (Ertz) is he has a lot of courage and he runs deceptively well. He is deceptively fast. You look at him and watch him and say he’s left-footed but he’s not. He changes directions and he has a good perception of how to run and how to make people miss.”

On Sunday afternoon the Wildcats accepted an invitation to play in the AdvoCare V100 Texas Bowl. K-State will take on Texas A&M in Houston, Texas, on Dec. 28.

Later Saturday evening the men’s basketball team took on the St. Louis Billikens in St. Louis, Missouri. The Wildcats dominated from start to finish in the 84-53 win.

Johnson finished with a double-double, while also leading the team in scoring. He finished with 21 points and 10 rebounds. He almost went perfect from the field as he missed just one out of his 11 shots. Sneed scored 15 points off the bench, with the help of some hot shooting from beyond the arc; he made four 3-pointers.

K-State used a 23-9 run over the final 11 minutes of the first half to break the game open. The Billikens were never able to get back into the game. They shot just 34 percent from the field. They were led in scoring by sophomore guard Jermaine Bishop, who finished with 11 points.

The Wildcats will play Prairie View A&M Tuesday night in Bramlage Coliseum next.

ANALYSIS: How the Lockett family trio helped put K-State football back on the map

Some football players announce plans to return to workouts after boycott