Home Culture Feature Long-distance engagement ‘hard but worth it’

When Diamond McNeill, senior in computer science and music theory, met Ramon Carias, a student at Metropolitan Community College in Omaha, Nebraska, in high school, she said she didn’t know they’d end up together.

“We were both in show choir; I was the dance captain and he did set,” McNeill said. “We talked a little bit, we were friends, but we never actually dated in high school. It wasn’t until I came to college that we actually started talking about maybe being in a relationship.”

From the time they started dating, McNeill and Carias have been together four years.

“It was about two and a half years into the relationship when I decided to ask the ultimate question,” Carias said.

When McNeill came home for the weekend to take her car to the mechanic, he got off work, came to her house and tried to blindfold her.

“Of course, he doesn’t know how to blindfold people very well, so I had to help him blindfold me,” McNeill said.

He then drove her to a park she had never been to before, where he had already set up the scene.

“We walked for a little bit and he stops me in this area, he takes off the blindfold and I see two tiki torches and a heart made by rose petals,” McNeill said. “Along the way past that, there’s a creek area and he had blankets laid out and he had a radio. We went over there and he had a radio and played our song that we danced to.”

After they shared a dance, he asked her to marry him.

“I was crying and I didn’t know what to do,” McNeill said. “I was trying to say yes, but the words didn’t come out, so I’m shaking my head yes, but he wouldn’t put the ring on my finger until I actually verbally said yes.”

For now, some miles separate the couple. Home for the couple is Omaha, where Carias said he works full time at an eye specialist’s office, in addition to attending school full time to earn his business administration degree.

McNeill and Carias both said the distance is hard, but it is worth it.

“Our relationship is a unique one,” Carias said. “We knew from the beginning that the distance would pose as an obstacle, but we were ready to face the challenges. After one year of being together, it proved to me that our love was strong and true. When another successful year came by, I just felt deep down that she was the one for me. We discussed that this would be a long-term engagement, that way it doesn’t interfere with college or career goals.”

McNeill and Carias also said they are excited to live in the same place again once they get married.

“Obviously we’ll be living together, because that would be weird if we didn’t,” McNeill said. “We plan on having a house, have an apartment first like anybody else. We’ll definitely settle down wherever we can both get jobs in the same general area. Since I’ll get done first, it’ll probably be wherever I’ll be at first and then move on from there.”

Until then, they will continue to endure and enjoy their long-distance relationship, knowing they have some of their favorite things to look forward to on their next visit.

“Her brutal honesty, cooking, similar nerdy interests and her goofy moments are to name a few (favorite things),” Carias said.

McNeill said her favorite thing about Carias is probably his corny jokes.

The couple plans on getting married in 2019, after they have both graduated. McNeill, whose graduation is anticipated for December 2017, said she is looking forward to being done with school before working on the wedding details.

“I’ve had some friends get married while they’re still in school and I commend them for that,” McNeill said. “For myself, I cannot deal with having to plan a wedding and school and studying for tests and work at the same time. It’s just too much for me.”

McNeill also said she is grateful to have understanding people surrounding them and their decision to push the wedding off until they have less on their plates.

“I get questions of people saying when you’re engaged, it’s normally within a year you get married,” McNeill said. “Most people understand the fact that we are both in school and want to wait to finish school. So there’s not very many, little to no ‘are you crazy?’ looks when I tell them that we’re waiting until after we finish.”

When the time comes, though, McNeill said she has at least one person interested in helping her make plans.

“My family, they were really happy about it,” McNeill said. “My mom didn’t want him to propose until we were both done with school, but she was still okay with it, so that’s all that matters. They were really excited. My sister definitely was the first one to say, ‘I’m going to plan your wedding.’”

However, during breaks the pair has been making some progress on planning the wedding.

“We did decide that we’re going to have (the wedding) back home,” McNeill said. “We decided that we were going to have it sometime around 1 p.m., just so that we don’t have lunch and don’t have to pay for dinner. Food is probably one of the most expensive parts of a wedding, so trying to keep that cost down to a minimum. We’ve narrowed it down to two places, so it’s just a matter of when I go home next, going and looking at those places.” 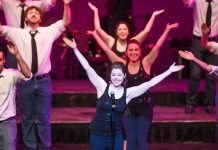 K-State and Fort Riley mix well with these engaged folks