Home Community Opinion OPINION: Christmas is the only holiday that seems to matter

Many people today see Christmastime as the season of gift giving and dollar signs between Christmas ads starting up in October, Christmas decorations being out by Nov. 1 and all the hype for the great holiday deals on Black Friday.

Now I won’t be the one to sit here and point fingers, because even I am guilty of partaking in all of this myself, but I will say it is wrong. Society rushes the holidays but for what? When did we lose sight of what the Christmas season is all about? Most importantly, when did Christmas become the biggest, most important holiday?

I remember Christmastime as a little girl so vividly. It was unlike the rest of the holidays. I remember making Christmas cookies from scratch with my grandma on Christmas Eve, and I remember not being able to sleep because I was so anxious to wake up to see all the gifts Santa Claus had brought me, but most of all, I remember getting to see all of my family in one place together enjoying each other’s company. That is exactly what Americans have lost sight of.

“In the United States, where the majority of the population adheres to variations of Christianity, Christmas has become the dominate celebration,” Amanda Knief said in her Secular Coalition for America article “Keep Christ in Christmas, and respect others’ voices during the holidays.” “It has engulfed every aspect of society: school holiday celebrations and performances, decorations on public and private buildings, music played on radio stations and in stores, the commercials on television and the economy’s reliance on the tradition of gift buying.”

This statement couldn’t have been said any better. It’s like we have become so infatuated with the entire idea of Christmas that we have literally forgotten about the rest of the holidays. Where’s all the hype about the Fourth of July or Halloween or even Thanksgiving? They are each days meant to be celebrated, but for some reason, Christmas seems to trump them all.

Evangelist Billy Graham responded to a question about why Christmas is important in his “Answers” blog on the Billy Graham Evangelistic Association website. Graham explained the original meaning of Christmas was to celebrate the birth of Jesus Christ, and whether or not people choose to acknowledge that anymore, that is what Christmas was all about.

I do understand many people believe in many different things, and not everyone is going to share the same beliefs. It is not my job to sit here and preach about beliefs, but if you are someone who does believe in God, then maybe make a small change this Christmas season. Maybe redirect your focus instead of being all about the gifts, decorations and food.

The idea of Christmas season being rushed is quite obnoxious and in fact a turn off, according to blogger Candace Derickx’s post “How early is too early for Christmas?” Being enthusiastic about Christmas and all that it brings is fantastic but don’t drive people crazy with it.

Christmas has a deeper meaning than the gifts and the decorations, and Christmas shouldn’t be starting in early October. Christmas is supposed to be celebrated in the month of December and it should stay that way. Society needs to stop pushing this Christmas thing down everyone’s throats months before the actual holiday.

With a little work from everyone we could one day return to the way Christmas once was. Give it back its’ original meaning. 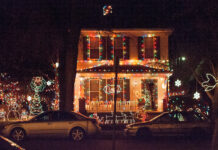 Manhattan lights up for the holidays