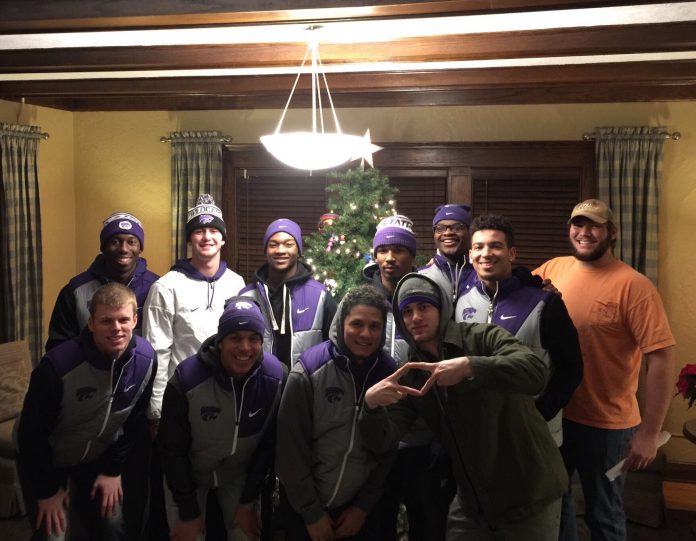 Purple joined the normal Christmas colors of red and green as a group of K-State football players took to the streets of Manhattan Thursday to sing Christmas carols.

Freshman safety Denzel Goolsby put out a call on Twitter on Dec. 8 to “assemble the greatest Christmas carol group in K-State history.”

Even actor and K-State alum Eric Stonestreet and the Pride of Wildcat Land wanted in on the holiday fun.

Bring out your best Christmas sweater along with your holiday spirit. I'll supply the hot chocolate. https://t.co/I8vwPbmVXQ

After just one week of preparation, the group was ready to warm hearts and bring festive cheer throughout the Little Apple.

Our Christmas carol group is ready. Tomorrow evening hearts will be softened, cheer will be spread, and grown men will be reduced to tears.

Coming to a house near you Kansas State Football team Carolers ?#HolidayFun

Pulling up to the first house ? for the night..#vocals

One of their stops was Zeta Tau Alpha sorority.

Thank you to some of the K-State Football team for the Christmas carols!!!! #TheyWerentSilentTonight @kstatesports pic.twitter.com/yJF6HLV22N

Just one of the many houses your Kansas State Football Christmas Carolers blessed tonight. ??? pic.twitter.com/um4MHbaojX

@Dalvin_warmack1 ADPi loves you!! Thank you for coming by!

@DenzelGoolsby Thanks for posting this! you guys are so awesome! Love you! EMAW

@DenzelGoolsby This is awesome!Just another reason 2 be proud #EMAW.Thanks 2 u and ur teammates 4 being the people u r! #kstatefb #character

@DenzelGoolsby One more reason why I love my Cats!

The team definitely did not take an L for their performance. Listeners were throughly impressed with their vocals.

And most importantly, they passed their final.

Deuce Vaughn named True Freshman of the Year by 247Sports