It all started when Shaquille Gonzalez was in seventh grade.

One of Gonzalez’s good friends, Shaikeen Epps, also known as TYNK, gave him a mix tape he created. Inspired by the tape, Gonzalez started learning and working with his friend. In between playing basketball and being a middle school student, Gonzalez and TYNK would learn the fundamentals of producing music in a hot garage.

In eighth grade, Gonzalez started to produce music and continued throughout high school in order to hone his craft. Since then, Shaquille “Super Shaq” Gonzalez, senior in general studies, has been rapping and producing music professionally while attending Kansas State.

Gonzalez was born in Puerto Rico, but now calls Georgia home after moving various places with his military family.

Young Gonzalez was profoundly influenced by the sounds of hip-hop and rap music from artists who also called the “Peach State” their home. He said he was influenced later in his life by the heavy drum beats that are indicative of home-grown Georgia music.

As a local artist, Gonzalez produces and raps his own music from start to finish, testing out sounds and laying down beats until the product reflects his artistic vision.

“I didn’t start off making good stuff and I wouldn’t even say all my stuff is perfect right now, but more people be liking it too,” Gonzalez said. “They see a dope kid doing his thing and they respect it.”

Gonzalez describes himself as a perfectionist and said he puts a lot of time and effort into his music to be able to produce his best work.

“This is not a 9-to-5; this is a wake up ’til I go to sleep type s***,” Gonzalez said, “That’s how you gotta do it, especially if it’s something you love. You know you gotta try to be perfect at it, and I’m really trying to make some music, like I’m not trying to just put out some bulls***.”

Much of Gonzalez’s current music reflects a lot of the college party life and attracts a certain audience, though he said he hopes to let it evolve throughout time.

“I like dropping fun tracks right now,” Gonzalez said. “That’s why a lot of my shows end up being super energetic, but I eventually want to get to Kanye and just have symphonies and orchestras. Right now, I mean, I gotta work with what I got.”

A profound moment that opened a lot of doors for Gonzalez’s career came April 25, 2015. At the time, 19-year-old Gonzalez and a couple of friends found out Waka Flocka was going to be in Lawrence, Kansas. He and his two buddies snuck into the concert for a private fraternity date party.

“I’m from Savannah, Georgia … we still listened to all Atlanta music, like Gucci and Waka were like our gods back in the day,” Gonzalez said. “They were just like our role models basically.”

After attending the event, Gonzalez walked by the rapper’s trailer. He remembered he had a CD full of new mixes he had just created in his back pocket. Although he was hesitant, he decided to take the plunge and knock on his idol’s door.

The door barely opened, as Flocka’s manager stood there. Handing the mix tape to the manager, he walked away, thinking, “D***, I don’t know what’s going to happen.”

Just seconds after walking away, he received a text: “It’s Waka Flocka. Come back to the bus.”

Freaking out, Gonzalez went back to the tour bus, which was playing his own music. Since then, he said he and Waka Flocka have kept in touch, and Gonzalez shares music he has been working on with Flocka every week.

“He’s a big fan of my music,” Gonzalez said. “Me and him just got a lot of stuff in the works … He’s like my big brother.”

On top of his music career, Gonzalez goes to school, though he said he hopes he does not have to fall back on his degree in the long run. He said balancing both is the hardest part but has found most professors are understanding.

“Music is plan A for me, but of course, having a degree is a good backup just in case something happens,” Gonzalez said. “A lot of people don’t even know I go to school. Like, a lot of fans in the Midwest didn’t even know I went to K-State. I’m really doing this for my mom.”

Gonzalez not only has to fit working on his music around his school schedule, but also has to make room for his live performances. Ever since he began performing on stage, he has teamed up with Mikel “HypeManKel” Neil, a 2016 K-State alum and Brent “BJ” Lindsey Jr., junior in sociology at K-State.

Neil and Lindsey met Gonzalez after interviewing him in the spring of 2016 for their show on WildCat 91.9, Thirsty Thursdays. They have been performing together ever since for all of Gonzalez’s performances around the Kansas area.

“I’m his DJ, so I just have to know when he wants to fade stuff in and out and when he wants things dropped and basically have him hyped before he gets on stage and stuff like that,” Lindsey said.

Neil said he also contributes to pumping up Gonzalez before his performances.

“I hype-man with him, perform with him word-for-word and get the crowd ready,” Neil said. “So I will go out there and have five or six minutes where I’m just getting the crowd hype. His music is high energy music, it’s feel-good music, it’s hype, so it’s going to make you move anyway.”

Gonzalez will be performing in Lawrence, Kansas, at the Granada Theater on Friday, Feb. 3 with Rich the Kid and Roy Fresco and on Tuesday, Feb. 7 in Kansas City, Missouri. He also has more shows coming up in the spring, including the South by Southwest Festival. 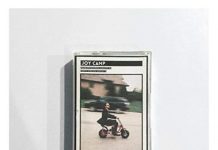