Just a few weeks into the 2017 legislative session, concealed carry of handguns on state college campuses has become a top issue that the Kansas Legislature will likely review.

Rep. Stephanie Clayton, R-Overland Park, introduced a bill to permanently uphold the ban on concealed carry at Kansas colleges and universities. A similar bill was introduced in the Senate.

Clayton said she would also support extending the standing exemption or moving the decision to a more local level, such as through the Kansas Board of Regents.

“This is the last chance that we have … to prevent implementation,” Clayton said in a phone interview. “I think part of the reason why there wasn’t anything introduced in previous sessions was, in some cases, due to lack of communication between legislators and because in previous sessions, there was no way that we had the numbers to pass legislation like this.”

Concealed handguns will be allowed on state university campuses across Kansas when the college exemption in the Personal and Family Protection Act, a law passed by the Kansas Legislature in 2013, expires on July 1, 2017. Only by installing “adequate security measures” at public entrances will institutions be allowed to restrict concealed carry, a prohibitively expensive alternative that Kansas State will likely use sparingly.

Laws enacted in Kansas in the past several years have given gun owners more freedom. July 2014 marked the end of local firearm and ammunition control, the implementation of statewide open carry (open carry will still be prohibited on university campuses) and the elimination of municipal records of concealed carry permits. In 2015, state training and permit requirements for concealed carry were thrown out by Gov. Sam Brownback.

In the wake of the 2016 elections, the relatively more moderate Legislature brought cautious expectations that many issues would be revisited with a more compromising lens.

Clayton said students have the most power to affect the law by testifying at committee hearings and the concealed carry law does not allow for deans and faculty members to give input in their professional capacity.

The first opportunity to revisit the matter will come when Senate Bill 53, one of several bills introduced to change the current law, has a hearing in the Senate Federal and State Affairs Committee on Jan. 26 at 10:30 a.m.

“The legislative makeup is vastly different now after this most recent election, so I think part of the reason why we’re pushing for it is it’s much more likely to pass,” Clayton said.

Seventy-two percent of responding K-State faculty and staff, along with 62 percent of responding K-State students, said the state law should either be repealed or be amended to extend the university exemption, according to Fort Hays State University’s Docking Institute of Public Affairs’ surveys titled “Kansas Board of Regents Council of Faculty Senate Presidents Campus Employees’ Weapons Survey” and “Kansas Board of Regents Student Advisory Committee Student Gun Policy Opinion Survey.”

“I think that these bills are more representative of what the community members at higher-education institutions think in terms of an environment,” Van Ranken said. “I think that many students would feel safer in an environment where concealed carry would not be allowed.”

“We’re planning on continuing to stay up-to-date on the issue and continuing to communicate with legislators and the Regents about students’ opinions on this matter,” Van Ranken continued.

As with any bill, the first step is through committee, which in Clayton’s case, is the House Federal and State Affairs committee.

“There’s a very good chance that we’ll have a hearing on it,” Rep. John Barker, R-Abilene, committee chairman, said in a phone interview.

Barker said that compromise may be possible between backers and opponents of concealed carry on college campuses.

“It may not be what the sponsor of the bill wants,” Barker said. “I think that the hearing will probably be divided.”

The measure was signed into law by Brownback, an ardent supporter of concealed carry as a constitutional right, untethered from permits and training. A spokeswoman for the governor said that while Brownback will continue to support Second Amendment rights, he would give “due consideration to any bill that reaches his desk.” 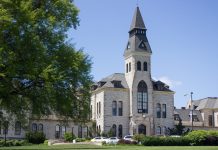