Some may think that because students see the statement about ‘Academic Honesty’ in their syllabi multiple times a semester they understand it. However, the numbers in the Honor and Integrity System’s annual report to the provost, faculty senate and student senate show not all students understand academic honesty.

Steve Starrett, director of the Kansas State University Honor and Integrity System, said there were approximately 70 alleged violations reported during the fall 2016 semester, which is average for a term. However, comprehensive numbers will not be available until August.

“Each semester is unique,” Starrett said. “We are a very large community with over 20,000 students. Sometimes it looks like a large number, but when you compare it to the size of our entire Kansas State community, it’s not a very big number. Honor code violations are not required to be reported. Many professors deal with honor code violations in the classroom and deal with the students individually.”

Plagiarism and unauthorized collaboration most common

The most common violation reported in the 2015-2016 annual report is plagiarism. Starrett said he believes this violation is common due to an increasing reliance on technology.

“Plagiarism is quite easy in our age of available technology, where there is lots of resources online that you can have access to quickly,” Starrett said.

The access to technology also makes it easier to find students who plagiarize, Jennifer Bormann, associate professor of animal sciences and industry, said.

“It’s really simple,” Bormann said. “There’s lots of programs out there that will check if this paper is the same as another paper. It’s a really easy way for me to see if students are selling their papers or giving their papers to others to use. It also will check papers against internet sources.”

Bormann said she stresses the importance of students doing their own work and to be careful to avoid plagiarism.

“In the academic world, it’s pretty serious,” Bormann said. “If I plagiarized something, I would get fired. It’s something that is pretty serious and we want to make sure we are doing our best to help students understand that.”

Besides plagiarism, unauthorized collaboration is another honor code violation that occurs frequently. During the nine years that Camilla Roberts, associate director of the Honors and Integrity System, has been with the program, Roberts said there has been an increase in alleged unauthorized collaboration violations. This number is over 50 percent with 30 cases reported in 2008-2009 and over 65 cases reported in 2015-2016.

This “gray area” could be a contributing factor to the 297 reported violations during the 2015-2016 school year. This amounts to an almost 90 percent increase in reports from the 157 reports in the 2014-2015 school year and a 107 percent increase over the 10 year average.

It is unclear if the surge in reports is due to additional violations, improved faculty awareness or a large incident in which 70 students were reported for one incident of unauthorized collaboration on an exam.

“We have so many students in so many classes — literally hundreds of thousands of assignments per semester,” Starrett said. “It’s hard to distinguish between if there really is an increase in honor code violations or if more professors know of our processes and were supportive.”

All classes are equal culprits in academic dishonesty

Starrett said a common misconception is that freshman are the largest culprits of honor code violations. However, the annual report shows a fairly even distribution between classes, with violations from the freshman class counting for the smallest percentage of total violations at 16 percent. Graduate students, a smaller percentage of the student body, also struggled with academic dishonesty.

The Honor and Integrity System office only receives a few genuine reports of academic dishonesty from students, which Starrett said was likely due to the culture of K-State and that students do not feel it is their place to report other students.

Repercussions for violating the honor and integrity system vary depending on the severity and frequency of the violation.

Thirty-one percent of cases in 2015-2016 resulted in zeroes on assignments, while 22 percent of cases ended with a warning and 11 percent resulted in a grade of XF, meaning failure due to academic dishonesty on the student’s transcript. Very rarely did honor code violations result in suspension or expulsion, and only one or two students found themselves in that situation, Starrett said.

The university Honor Council is responsible for hearing cases and deciding on consequences in cases that are contested. Vladimir Karimov, graduate student in biological and agricultural engineering, has served on the council for two years and said the council is important to helping students learn.

“You have to struggle to learn something,” Karimov said. “If you don’t struggle you aren’t learning as much as you can. If a person tries to cheat, they shortcut this process. The Honor and Integrity System helps to eliminate this shortcut.”

Karimov said he believes it is important for students like him to volunteer their time and be involved in enforcing the honor code.

“The service for your community is very important and in some way you have to do that,” Karimov said. “The students and faculty on the Honor Council are volunteers and they are paying their service to the community in this way.”

“We don’t want students to find out about the honor code after they have had a violation,” Roberts said.

Starrett and Roberts said the Honor and Integrity System is necessary to show the importance of a degree and that the degree holds value.

“It’s critical for our university to uphold high academic standards,” Starrett said. “Employers are expecting our graduates to be trustworthy and to have learned their knowledge genuinely.” 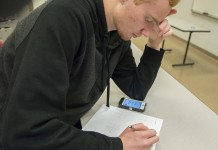