Activist and scholar Dr. Angela Davis spoke to students and community members on issues relating to racial discrimination and to celebrate the start of Black History Month on Feb. 1 in the K-State Student Union’s Grand Ballroom.

Over 1,200 people were in attendance and filled the ballroom. Students, faculty, staff and guests also overfilled into the hall of the Union to watch and hear the lecture from TV screens while sitting on the floor outside of the ballroom.

The recurring theme of Davis’s lecture was the necessity of a “collective resistance” shared by all people.

“I feel that at every point, we must make it very clear that this isn’t just a negro problem,” Davis said. “White Americans have a responsibility to work passionately and unrelentingly for the solution of the problem of racism.”

“It can be difficult to focus on one (type of discrimination) without also talking about another one just on accident or by happenstance,” Kez Demby, junior in kinesiology, said. “I think these things are so intertwined that we don’t even realize how intertwined they are.”

Davis described intersectionality, the understanding that the oppressed experience multiple oppressions simultaneously and inextricably. Thus, the success of the collective resistance ultimately depends upon the absolute unity and support of each member.

This makes achieving the solution to all oppressions extremely difficult, Davis said. And in light of recent events, including the inauguration of President Trump and the subsequent “Muslim ban,” the situation seems dire.

“There is no way to make America great again,” Davis said. “If America is ever to be great, it must be in the future. The work that we have to do in the coming period is vast.”

Despite this, the resistance is not without hope.

“I think a lot of the change we need comes on a person-to-person basis: how we relate to people and how we educate people about things that are causing problems in our society,” Demby said.

“As we celebrate black history, we celebrate our own potential as agents in a collective quest for freedom,” Davis said.

Charles Schneider, senior in kinesiology, said there is a possibility of achieving the quest through education and understanding.

“More than anything, I think it’s important that we listen to everyone else,” Schneider said. “We need to establish viewpoints other than our own. Not everyone is born like you, not everyone is raised like you. Always be learning.”

For Davis, the most vital component to starting a change is the connection of oppression and violence from an institutional level to an intimate level: an attainable goal to achieve within the K-state family. 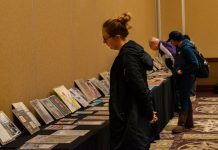 By the numbers: Undergraduate majors