At the rally, Marjan Habibi, graduate student in economics from Iran, said she is not able to see her husband under the immigration restrictions.

“My husband is in Iran, so I cannot go to see him, and he cannot come to see me,” Habibi said. “I hope that President Trump actually just makes an exception for students. We’re only students, we’re not terrorists. Not all of us immigrants are terrorists.”

Lisa Tatonetti, English professor and one of the rally’s organizers, led participants in several chants, such as “K-State won’t hate” and “no ban, no wall; Manhattan, Kansas, welcomes all.”

Tatonetti also introduced speakers at the rally, which included representatives from several multicultural student organizations, including the Indigenous Alliance, the American Ethnic Studies Student Association and the Universalist Unitarian Church.

LaVerne Bitsie-Baldwin, director of the College of Engineering Multicultural Engineering Program and co-chair of the Indigenous Alliance, said the alliance stands with all immigrants and refugees.

“Today, we stand in solidarity with the K-State community,” Bitsie-Baldwin said. “For over 500 years, the indigenous peoples have taken in outsiders and refugees from all around the world. We have accepted a multitude of individuals and beliefs, and we are here in solidarity with our Muslim allies.”

“The executive order issued by Trump on Jan. 27, protecting the nation from foreign terrorist entry into the nation, does not protect nor does it ensure safety,” Petillo said. “Instead, it preys on fears, it directs anger and it effectively does us all harm.”

“When we buy into these ideas, we show that we do not know these histories,” Petillo said. “If we are really against terrorism in all its forms, we stand for migration. We stand for each other, and we stand against this order.”

“We really need to take that anger and turn it into action,” Alonso Pena, junior in English and American ethnic studies and president of the American Ethnic Studies Association, said. “I really appreciate that we’re all here. We need to keep breaking the silences.”

“Mere hours after the CEO of Exxon Mobil was confirmed as Secretary of State today, hours after the House removed a restriction that required oil companies to disclose payments to foreign governments, what we are witnessing is the rise of fascism in the United States,” Cutter said. “We have always been told that this cannot happen here, that America is exceptional, that we are immune to this disease, but it is happening now.”

“We can no longer idly stand by while we allow this to happen,” Cutter continued. “Every single day, we must find ways to advocate and to resist against this regime. It does not stop with just advocating against the Muslim ban, or the wall, or any number of other things. We must advocate against all of it and fight every single day.”

“In 2010, the Tea Party did something amazing, as much as we might have hated it,” Hamer said. “They started local, and we need to do that here. You are K-State students who walk on Manhattan streets, you eat and drink in Manhattan’s restaurants and bars—let’s face it, you owe us quite a bit.

“It would be really nice if you showed up for things like city commission meetings, county commission elections, and if you voted locally whenever you could, because there is not just injustice in Washington, D.C.,” Hamer continued. “There is injustice in Junction City, 20 miles down the road. There is racism happening right here in your town, if you just pay attention.”

Sajid Rahman, graduate student in computer science and president of the Muslim Students Association, thanked rally attendees for their support.

“On behalf of the (Muslim Students Association), I would like to offer all of you my heartfelt thanks to stand here in support of us in this cold weather,” Rahman said. “There have been some negative impacts, but I would like to share some positive experiences. From the beginning of the executive order, we’ve received hundreds of messages and emails on Facebook and social media from all around the Manhattan community. They want to show their support, they want to stand next to us”

After the speakers addressed the crowd for about a half hour, Tatonetti led protesters on a march along Anderson Avenue to the south of the parking garage, and the march blocked the entrance to Mid-Campus Drive for about 15 minutes.

Passing cars honked at protesters, but it was not clear whether the drivers honked in solidarity with the protest.

Although the rally initially began as a demonstration of solidarity with Muslim students and community members affected by the immigration ban, the marching protesters began to yell chants such as “black lives matter” and “sí se puede.”

Most of the protesters later moved towards the Union for a lecture by Angela Davis, political activist and keynote speaker for the Black Student Union’s celebration of Black History Month.

After the rally, Cynthia Ferguson, sophomore in computer science and speaker at the rally, said

“I’m here today because I firmly believe in brotherhood, friendship and most importantly, I don’t like division at all,” Ferguson said. “I feel like everything that has been going on with Trump’s executive order is dividing our country. It’s racist, it’s fascist, it’s against our Muslim brothers and I felt the need to speak on it.”

Other attendees said they hoped the rally inspired people to affect change.

“Through media and other people, we can get the word out that there’s people here supporting immigrants,” Rachel Whetstone, Manhattan resident, said. “The rally also helps people know how to get in contact with their congress people, and that we need to do it by telephone, because other means don’t work as well.”

“I think that one thing here at K-State is that we need to get people aware of what’s going on, because so many people feel like everything is OK,” Wiley said. “This rally showed people that something must be going on. It’s going to cause people that don’t know about these issues to ask questions.” 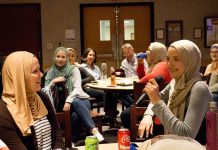 ‘A Day in Hijab’: Discussing the divide 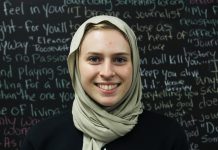 OPINION: My day in hijab

‘A Day in Hijab’: Discussing the divide