After a crushing overtime loss at home to TCU, it appeared the Kansas State men’s basketball team might be on its way to another year of missing the NCAA Tournament. The Wildcats might have erased all doubt after stunning No. 2 Baylor in Waco, Texas, on Saturday, 56-54.

In the past few games, the Wildcats have gotten to a slow start, digging themselves a deep hole to try and climb out of. That wasn’t the case on Saturday as the Wildcats built up a 37-22 lead at halftime.

K-State saw its lead grow to 19 points at one point during the game, but the Bears clawed their way back. Poor free-throw shooting down the stretch for the Wildcats brought drama, as the team was 4-12 at the line on the day.

Baylor had the ball down two in the final possession of the game, but a block by senior forward D.J. Johnson sealed the deal, as the Wildcats held on for a two-point win on the road.

“I couldn’t be any prouder of our guys today,” head coach Bruce Weber said to K-State Sports. “When you talk about playing one of the top two or three teams in the country on their court and you are up 16, 18 points, you’ve got to be pretty impressed.”

Sophomore guard Kamau Stokes led the way for K-State, scoring 15 points, nine of which came from behind-the-arc. Fellow sophomore Dean Wade got off to a hot start and ended the day with 12 points and six rebounds.

The player of the game for the Wildcats was senior Wesley Iwundu. He had a terrific all-around game, scoring 10 points, grabbing eight rebounds and dishing out five assists.

Things won’t get easier after knocking off the No. 2 team in the country, as the Wildcats get ready to host arch-rival Kansas on Big Monday.

The Jayhawks are 2-2 in their last four games, but looking at the level of competition, it wasn’t too bad of an outcome. KU lost on the road to West Virginia and most recently a stunning loss in Allen Fieldhouse to Iowa State. The Jayhawks did pick up two huge wins at Kentucky and at home against Baylor.

Kansas is led by senior guard Frank Mason III. Mason is having a terrific year, averaging a staggering 20.4 points per game. That’s not all Mason does, as he also averages 4.3 rebounds and 5.2 assists-per-game.

The Sunflower Showdown will tip off at 8 p.m. in Bramlage Coliseum and will be televised on ESPN. 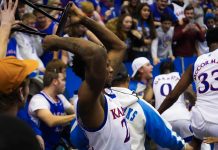 Busy week in store for K-State sports, including track and field’s...