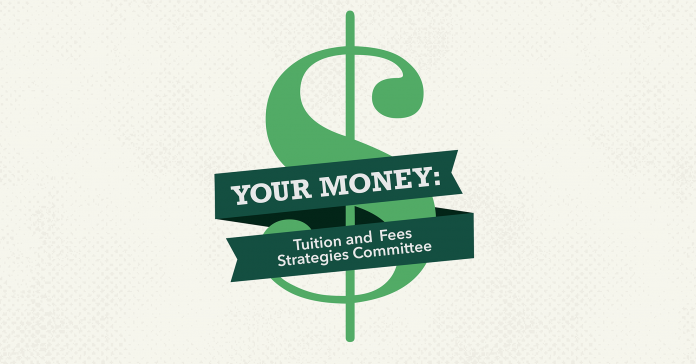 If you had a million dollars, what would you spend it on?

College of Agriculture losing morale due to state budget cuts

All colleges are expected to present a fee review to the committee every three years before a credit-hour fee renewal will be further considered.

Trent McGee, graduate student in counseling and student development, said he is concerned student fees have become permanent additions to the cost of attendance at K-State.

“It’s been three years,” McGee said. “Is it now the status quo that this fee is going to be permanent?”

Boggs said he would get rid of the fee if he could, but he does not see that as a possibility if he wants to maintain the high quality of education that students receive in the College of Agriculture, especially with a $300 million state deficit.

“Here’s an example where fees are going up and we call it ‘college fees,’ but it’s really cost of attendance,” Pat Bosco, vice president of student life and dean of students, said. “We have heroin now and there’s no way we can back off almost a million dollars worth of fees each year.”

McGee said he worries “fee heroin” has become a permanent addition to the increasing costs to attend K-State.

“I sit here and go, (the administrators) have to look for a revenue answer, and your easiest/hardest answer is on students,” McGee said. “But at the end of the day (Boggs) sees this as permanent as heroin, ‘I can continue to cut it and it will continue to go on the back of students.'”

Bypassing the Board of Regents

K-State and its colleges resort to student fees instead of tuition increases because it is a way to circumvent the Board of Regents.

“We may be cut by the state and capped in terms of our tuition increase,” said April Mason, provost and senior vice president. “No one wants to increase these fees, but a college fee that generates less than a certain amount of money, we don’t have to take it to the Board of Regents. It’s a way to get resources to the college.”

“We’ve seen state (universities) stand up (to their state governments),” McGee said. “LSU is a prime example. The president came out and said if we don’t get more state money, then we’ll have to shut down football. All of a sudden, money appeared. The state is responsible for our budget, and if at the end of the day we go belly up, that’s on the state.”

“The state now sees this as heroin,” McGee continued. “At some point, (added fees) has to stop. And I wonder because of our enrollment drops and etcetera, etcetera, are we at that point (that LSU was at in 2015)?”

“We are. It’s at that point,” Bosco replied. “We’re seeing the elasticity of what students can pay on the backs of our students. Open record: we’re at that point. We’re hurting with spring enrollments … is the Collegian here?”

Before Bosco could continue, members of the committee paused to laugh at Bosco’s pause to see if he was being recorded by the Collegian.

“We’re at that point … there’s an increasing gap between financial aid and cost of attendance, not only here, but in America,” Bosco continued. “We’re disenfranchising the middle class, particularly those families between $50,000 and $90,000 income. That’s bread and butter for our school.”

Bosco said that is why it is important to review why the Tuition and Fees Strategies Committee was formed 10-12 years ago.

“It was formed to deal with the rising cost of tuition and fees and decide to recommend who is going to pay, how much and where the money is going to go,” Bosco said. “It remains the same today.”

“I would be disingenuous with you if I thought the state was going to be able to give us enough money that we could (use to eliminate fees),” Mason said. “I know that Dr. Bosco uses the heroin analogy. We can call it heroin. I just see it as an incredible need.”

“I would love, just as Dean Boggs said, you give me a million dollars, we’ll take that $900,000 fee (generated money) away,” Mason continued. “It’s just not happening. I would love that, but that’s not just the trend we’ve seen in higher education … (but) my crystal ball is as foggy as anyone’s.”