Students in the Kansas State College of Engineering dressed their best in hopes of finding careers and internships in their field at the Engineering Career Fair on Feb. 7 and 8.

Anne DeLuca, assistant director of the Career Center and chair for the Engineering Career Fair, said she has been planning the career fair for a little over a year, and in total over 100 employers came to talk to K-State engineering students.

“Getting to see the students dressed up and meeting those employers is so exciting,” DeLuca said. “I love career fair day because it’s exciting and challenging and it’s really fun to work with the Career Center team, and it’s been fun working with the College of Engineering.”

This was the first time the Engineering Career Fair was hosted in the Engineering Complex, and DeLuca said she hoped more students would attend since it was in their building rather than in the Student Union, as had been done for previous career fairs.

Luke Stallbaumer, senior in mechanical engineering, was one of the students talking to potential employers at the career fair.

“I didn’t really prepare a whole lot, but in between each interview I had, I tried to research the next company that way I didn’t go into it completely nervous,” Stallbaumer said. “For the first couple ones I was kind of nervous, but after that it became kind of routine, and I’m feeling good.”

Some of the employers that students like Stallbaumer had the opportunity to talk to were K-State alumni. These employers could be recognized by the purple powercat on their name tags.

Two of these employers were Meaghan Moore and Brian Moore, both graduates of K-State’s industrial engineering program.

The couple said they were excited to come back to K-State and get to see their department and reconnect with professors and other familiar faces. They were also excited to check out the new engineering building.

“It’s fun to see folks who you were once in their spot,” Meaghan said. “You know you were once nervous and walking around and talking to people you don’t know. Now we’re on the other side.”

Not much has changed on the other side, though, Brian said.

“Now we’re here nervous and standing in one spot,” Brian said. “It does make me miss college.” 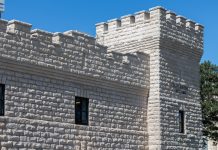