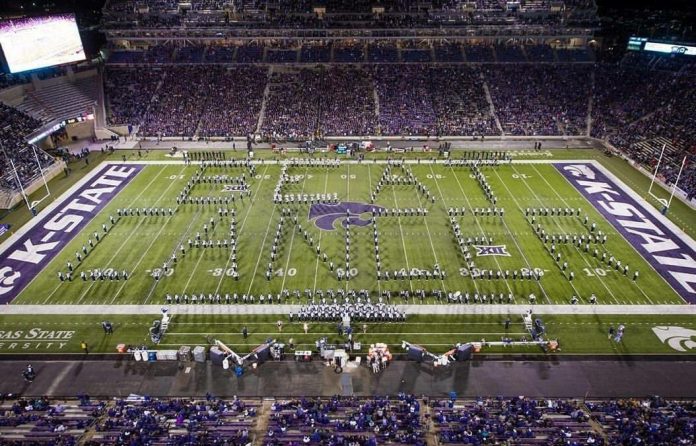 K-State Athletics announced Monday morning that Bill Snyder was diagnosed with throat cancer. Following the announcement, Twitter users offered words of support to the Hall of Fame coach, who said he would continue coaching.

The Pride of Wildcat Land marching band shared two of Snyder’s 16 Goals for Success, accompanied by a photo of the band forming “beat cancer” on the field at Bill Snyder Family Stadium.

Twitter user Mike Stanley added another one of Snyder’s goals.

Rule #13: Expect to win and truly believe we will. You've got this, Bill. #BillSnyder #EMAW #Family

The Manhattan area community rallied behind the coach, including Maj. Gen. Joseph Martin, commanding general of the 1st Infantry Division and Fort Riley. The 2016 football season marked the 10th year of the formal partnership between Fort Riley and the K-State football program.

The @FortRiley community sends our thoughts to #Kstate coach #BillSnyder & his family. The #BigRedOne team supports you all the way Coach! pic.twitter.com/B4Ftivjsj1

The sports world joined in the support of Snyder, including Big 12 Conference foe West Virginia.

Get well soon @CoachBillSnyder! We will see you this fall in Manhattan. pic.twitter.com/u8UlhAJi8L

Our thoughts and prayers are with Coach Snyder for a speedy recovery from throat cancer. #EMAW pic.twitter.com/RTGjVCu9cy

Holly Rowe, an ESPN sideline reporter who has covered K-State football and basketball, is a cancer survivor.

So many prayers for someone I admire greatly. @KStateFB Bill Snyder announced he has been undergoing treatment for throat cancer. ?

Among the many journalists who tweeted their support for Snyder was Zaldy Doyungan, a K-State graduate and KSNT News sports reporter.

You're messing with the architect of the greatest turnaround in college football history… You won't win. #BillSnyder

Snyder won his 200th game as the head coach of K-State on Nov. 26, 2016, against KU. The 201st came against TCU and the 202nd was the Texas Bowl victory over Texas A&M, after which several K-State fans proclaimed that Snyder owned Texas due to five victories over Texas schools in one season.

Coach #BillSnyder is going to pick up his 203 win once he kicks throat cancer in the mouth!! Good luck Coach!! #KSU #Family #KStateFB

Steve Brisendine, a sports reporter covering the professional soccer team Sporting KC, tweeted that Coach will send one of his trademark notes to cancer once he beats it.

Bill Snyder is going to beat throat cancer and then send it a classy handwritten letter.

Ross Jensby, a K-State graduate, tweeted that Snyder, who is known for providing little information on his teams to the media, would now have an excuse to avoid press conferences.

1.) Coach Snyder is going to fight this and win. 2.) He will use this strategically and not hold a press conference for the next 50 seasons. https://t.co/qheMlWflyv

Another Twitter user pointed out Snyder’s unorthodox approach to recruiting players and filling positions, which includes turning overlooked recruits into NFL stars. Do you think that pharmacy school recruit came from KU?

Bill Snyder could beat cancer with a walk-on Oncologist, a JUCO surgeon, and an X-Ray tech he converted over from a Pharmacy School

Bill Snyder, 77, beating throat cancer & not missing any time is the most Bill Snyder thing ever. That guy is the toughest SOB ever. #KState

Others pointed out that Snyder apologized in the press releases for not telling family and friends personally.

Only a man as incredible as Bill Snyder publicly apologizes to friends in a news release for not disclosing a major health concern. Amazing.

Our coach got throat cancer, didn't stop coaching, and then apologized for not telling us sooner. What did we do to deserve #BillSnyder

If Bill Snyder has throat cancer and can still make it to the spring game I can make it to my 8:30

The Johnson Cancer Research Center at K-State tweeted its own support for Snyder.

Coach #BillSnyder does so much to help #KState fight #cancer. Thinking of him & fam now as he beats throat cancer. https://t.co/4YOqa7Bh4b pic.twitter.com/GZBE6SuxJD

The following tweet includes a link to more information on how to donate to the center’s cancer research.

Those wishing to send support and well-wishes to Coach Snyder may do so at the address in the following tweet. They may also fill out the Collegian’s get-well card in today’s print edition.

Am told people wishing to send Bill Snyder letters of support can address them to:

You decide if the heart on the cover is for Valentine's Day or Bill Snyder. Fill out the card and take it to the OSAS desk in the Union. pic.twitter.com/WuwHf9r5aN