The Kansas State tennis team is headed to Chicago to take on the University of Illinois at Chicago at the Flames Tennis Center on Saturday, followed by a match on Sunday against DePaul at Lakeshore Sport & Fitness. Both matches are set to hit off at 1 p.m.

The Wildcats continue their four-game road trip, competing to keep their winning season going at 6-3. K-State is coming off two road wins, handling North Texas 6-1, and a hard-fought victory against Washington State 4-3.

“We are coming off a great weekend where I feel like things really came together for the first time this spring,” head coach Danielle Steinberg said to K-State Sports. “The hope is that we can build off the weekend and the momentum going into Chicago.”

This is K-State’s first time competing against UIC and DePaul.

The University of Illinois at Chicago (4-2) has won their last two matches, defeating both Bradley and Illinois State 4-3. K-State looks to spoil UIC’s undefeated home record of 4-0. The Flames have rallied behind Georgie Sanders, who is coming off her second consecutive victory at the No. 2 spot.

DePaul has been an on-and-off team, sitting at 4-5 this season. The Blue Demons look to get back on track after falling to St. Johns 5-2 last Sunday. It was the first loss for DePaul at home in the last five years. They will look to bounce back against Indiana the day prior to playing K-State.

Freshman Ines Mesquita has shined all season for K-State with a 5-2 record in singles play and has had two effective outings in the team’s last two matches. This earned her the Big 12 Player of the Week as she heads to Chicago to keep her successful season going.

This will conclude the Wildcats’ four game road trip. They will then return home to take on the University of Houston on March 3 in the Mike Gross Tennis Stadium. 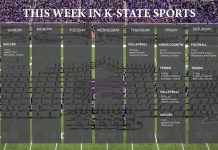 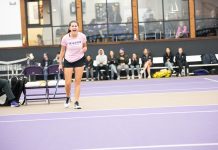 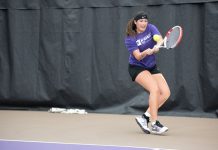 K-State tennis looks to bounce back against Houston