A tenet of successful leadership is owning your mistakes. Obviously, that is something soon-to-be former AD John Currie never learned. He’s heading out of town before taking any responsibility for the Coach Weber situation he left behind. A year ago, he opted to double-down on Weber while working his own exit strategy. When the Weber saga blew up, Currie already had his bags packed and the university inherited a mess of a decision — keep Coach Weber another year or cut him loose.

To survive the day-to-day brutality of competing in the Big 12 demands schools constantly improve. To stand pat risks irrelevance. Coach Weber is a decent person, but his time in Manhattan is finished. He will depart rich — one year of his salary is more than average Americans make in a working lifetime. He will likely land at a mid-major and continue coaching.

That puts new university President Richard Myers in a difficult situation — who does K-State pursue? Likely no established Power Five coach will come, which leaves a hot mid-major coach to woo — the coaches at Wichita State, Butler, Dayton and VCU come to mind.

In the end, AD Currie removed himself; his leadership in this matter was lacking.

OPINION: John Currie — the good, the bad and the ugly 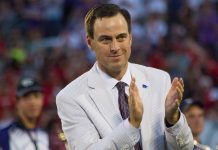