In a news release from the Manhattan Fire Department, the structure fire at 700 North Manhattan Ave., which is now out, resulted in “a total loss” of the building.

Fire at The Dusty Bookshelf

The two-story commercial building that was previously The Dusty Bookshelf, was under a building permit with the name of the new business listed as “Co-op.” The owners of the building, according to the release, are Sherilyn and Roger Bender of Sunrise Beach, Missouri.

According to an article in the Manhattan Mercury, Diane Meredith was the owner of The Dusty Bookshelf and said the store’s inventory had been moved out for a renovation project.

Thirty firefighters responded to the fire and no injuries have been reported. One cat, Oliver, was rescued from a neighboring business.

There is smoke damage to both Thread and Varsity Donuts in Aggieville.

The cause of the fire is still under investigation. According to the release, the Manhattan Fire Department, Riley County Police Department, Kansas Office of the State Marshal Fire and the Bureau of Alcohol, Tobacco, Firearms and Explosives will be conducting a joint investigation. 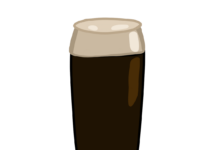 Local beer brewed with donuts to sell exclusively in Manhattan