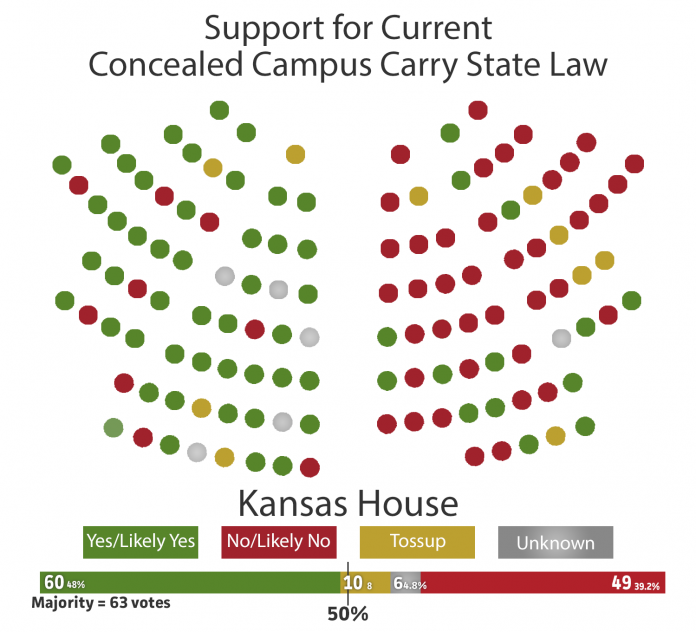 Every semester brings many new arrivals, such as first-time students, courses and sports seasons, but the fall 2017 semester will bring something different to Kansas State: the ability to carry concealed handguns on campus.

The Kansas Personal and Family Protection Act will void public university prohibitions on the concealed carry of handguns beginning July 1, admitting Kansas into a small club of eight other states that also allow concealed carry on university campuses.

The full adoption of the Texas concealed carry law on Aug. 1, 2016 caused the faculty senate to encourage professors and instructors at the University of Houston to be careful when talking about controversial subjects.

K-State will not be making any suggestions similar to the advice the University of Houston gave professors and instructors on adjusting course curriculum, Cindy Bontrager, vice president for administration and finance at K-State, said.

“It is a very individual-by-individual case because, as you know, there are faculty that are split,” Bontrager said. “I’m hoping it doesn’t really disrupt activities that much.”

“To our knowledge (no concealed weapons) have been accidentally or intentionally displayed or used … Texas has allowed concealed carry since the mid-90s and we have dealt with concealed carry holders all during that time, almost always without issue. From a criminal justice perspective we just viewed it as an extension of an existing condition.”

The Daily Cougar reported on an Oct. 23, 2016 incident in a residence hall room, which was excluded from the concealed carry law, involving an unlicensed individual threatening a resident with an unloaded handgun.

How similar will the experience be at K-State?

At first blush, it may be easy to think that Senate Bill 11, which prohibited Texas colleges and universities from restricting concealed carry, is similar to the concealed carry law in Kansas, but there are several distinctions.

Texas gun owners need to go through training and have a concealed carry license to be permitted on campuses, according to The Washington Post, a requirement that Kansas eliminated in 2015.

Texas law also bars concealed carry at many places on campuses without requiring the “adequate security measures” that Kansas mandates universities purchase and implement for their restrictions, according to the University of Texas at Austin’s “Campus Carry Policies and Implementation Strategies.”

The Kansas law’s security guidelines have proven prohibitively expensive for K-State, a university grappling with regular cuts to state funding over the past several years to permanently restrict areas of campus.

“It’s almost like an all-or-none,” Bontrager said. “You know, it would be difficult to prioritize and place (adequate security measures) on a few buildings.”

Although K-State is not planning to implement any permanent “adequate security measures,” events through K-State Athletics, at McCain Auditorium or at the K-State Student Union may be temporarily secured on a case-by-case basis, Bontrager said.

“When this whole statute came about, it came about because the state knew … that none of the Regents schools could afford to spend millions and millions of dollars to put this stuff in place,” Grice said.

The total cost to permanently restrict concealed carry in a single building would be about $282,633 up front; $225,408 in annual salaries and benefits for four new police officers, a one-time charge of $36,000 for equipment and $21,225 for an additional vehicle to accommodate the larger staff, Grice said.

What will the rules for concealed carry be at K-State?

While concealed carry in Kansas is only open to individuals who are over the age of 21 and are United States citizens, K-State is legally barred from requiring handgun owners to let the university know that they are carrying a firearm.

By law, the only time a concealed gun may be seen is if it is used in self-defense. Any other time a handgun is not in a secure holster completely hidden by clothing or in a bag, like a backpack or purse. If a handgun is accidentally dropped or intentionally shown to others, for example, it violates the K-State weapons policy.

Once reported to K-State Police with any of the blue emergency phones placed across campus, by directly calling 785-532-6412 or using the LiveSafe app, police dispatch will assess and confirm the situation and might order weapons policy violators to immediately leave campus.

When not carried, firearms must be secured in a locked car or in a student-supplied and administration-approved storage device in on-campus housing. Handguns cannot be left in classrooms, labs, offices or facilities on campus. If students living on campus do not feel comfortable sharing a room with someone with a concealed handgun, K-State Housing and Dining Services might be able to help.

What happens from here?

Between now and July 1, K-State plans to extensively educate and relay the policy change to the university community through avenues such as student and new employee orientations, Dean’s Council, the monthly First Tuesday Roundtables that department heads attend and the daily K-State Today email.

Bontrager says she thinks there might be more incidents like the Jan. 2017 “accidental shooting” in Goodnow Hall.

“A lot of people aren’t maybe as trained as well as they should be,” Bontrager said. “The law doesn’t require them to be that way, and so I think it’s a fair assumption to assume that, you know, some people aren’t as trained to use the weapon as others. I think we most likely will see an increase (of accidents).”

Such concerns from university professors and administrators across Kansas have been heard by many in the Kansas Legislature, who have made several attempts to move bills to change the law out of committees, with the most recent stalling in a tie.

Stymied in committees, some legislators have been prompted to look at amending future firearm bills that might reach the House floor after this week’s recess. An almost veto-proof majority of legislators voted on Feb. 23 after a floor debate to expand Medicaid under the Affordable Care Act after the same bill died in committee several days earlier.

Rep. Stephanie Clayton, R-Overland Park, among the several moderate Republicans and Democrats working to abridge the concealed carry law, said in a phone interview that she could see an amendment to add a license requirement for campus carry being debated on the House floor.

Clayton said some of the more conservative institutions could have previously adopted concealed carry policies before the state mandate.

The law is likely supported by about 61 legislators, opposed by about 49 legislators, and a group of 15 lawmakers who are either undecided or toss-ups, according to correspondence with representatives and senators, past interviews, statements and voting records.

OPINION: Concealed carry should be decided by campuses, not the state