The Kansas State women’s rowing team will kick off the season this Saturday with its first spring regatta on the Oklahoma River in Oklahoma City, where they will go head-to-head against Big 12 conference foe, the Oklahoma Sooners.

The team’s last meet was in the fall at the Jayhawk Jamboree on the Kansas River in Lawrence, finishing in fourth place.

During the October regatta, two boats were able to bring back hardware after some hard work.

The varsity eight boat took 8th place in a jam-packed race. K-State also had three other boats, placing 12th, 14th and 16th in the tournament.

The varsity eight did not get to improve from their 2015 Jayhawk Jamboree race with their previous 5th place finish, but there is still room to make a comeback for this spring season with the five remaining races before the Big 12 Championship and the NCAA Championship.

For those unfamiliar, a typical race consists of a length of 1.3 miles, or 2,000 meters. Rowing is broken into two classes, novice and varsity. Novice includes first-year collegiate rowers or transfers, while varsity consists of returning athletes.

With plenty of time to prepare for this meet, both groups are headed to Oklahoma City with momentum and look to improve on what they have already accomplished at past tournaments in the fall season.

The rowers will return to Oklahoma on March 18, where the will face the University of Tulsa.

This tournament will mark the beginning road of preparation to the Big 12 Championship, set for May 13 in Oak Ridge, Tennessee. 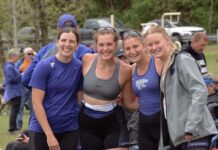 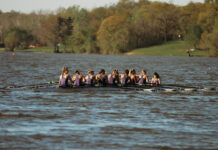 Rowing team dominates at Creighton Duel, first competition in over a...