The casual atmosphere of Johnny Kaw’s Sports Bar in Aggieville proved to be a suitable location for the launch party of FriendLynk, an app that tracks the location of contacts in communities such as Manhattan.

Alex Pilsl and Cooper Murray, co-founders of the app and 2014 Kansas State graduates, hosted a launch party for the app Thursday evening in Aggieville.

FriendLynk is an app designed to connect friends while on-the-go, and the relaxed and social environment of Johnny Kaw’s allowed attendees to test out the app and connect with friends.

“(The app) was created with the intention of college years and for young professionals after college while you’re traveling,” Murray said. “It made us think of tailgating.”

Pilsl wanted to create a way to connect with friends while in different cities.

“It’s an on-the-go social network that connects friends and lists local events,” Pilsl said. “We would go out and couldn’t get ahold of friends, then we’d find out they were literally two blocks away. This is a way to connect and make it easier to meet up.”

The app has a map with pins of where contacts who use the app are located and allows users to locate each other by sharing their locations. The app also includes event listings, in-app ticket purchasing and connections through voice, texts, directions or “lynks,” according to the app’s listing on the Apple App Store.

The event at Johnny Kaw’s drew in college students, Manhattan residents and many friends of the app’s founders.

“If this app was available when we were in college it would have been extremely convenient,” Jared Wasinger, Manhattan resident, said.

The co-founders said the launch party at Johnny Kaw’s was a good way to publicize, get feedback and learn about what people want in the app.

According to FriendLynk‘s website, the app’s goal is “to increase … happiness by providing (users with) an enhanced social environment centered around friends, events and creating memories.” 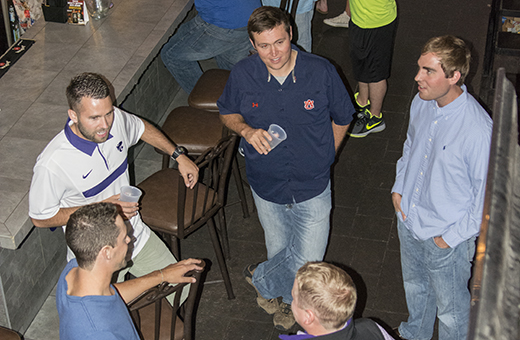