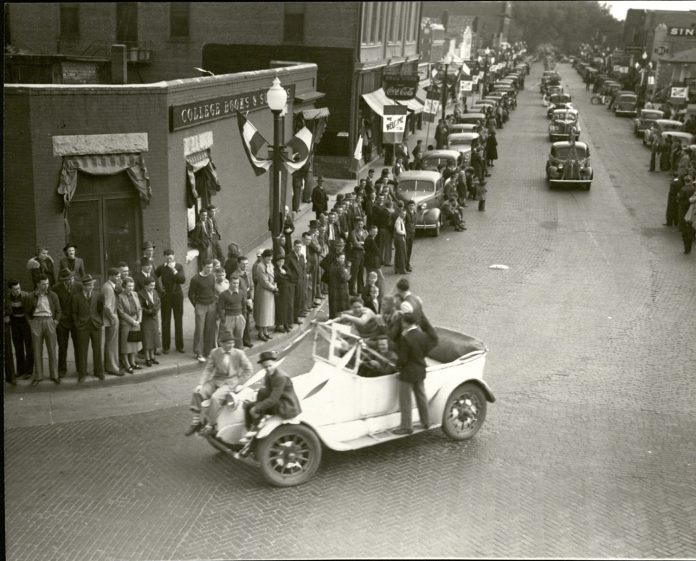 By Hannah Johlman and Jill Seiler

Students at K-State woke up Thursday to news that a fire in Aggieville had caused damage to The Dusty Bookshelf at 700 N. Manhattan Ave.

As The Collegian reported last week, the fire was caused by the “self-heating” of a wood stain being used in the remodeling of the building by owners Diane Meredith and her husband. The fire caused $822,000 in damage to the building and its neighbors, Varsity Donuts and Thread, both of which are again open for business.

The building that housed The Dusty Bookshelf since 1991 has a long tradition of serving students at K-State.

“It is the oldest standing building. Thankfully still standing, but barely, in Aggieville,” Meredith said in a phone interview Friday.

The building began as a student-owned and -run bookstore in 1908, according to Aggieville 1889-1989: 100 Years of the Aggieville Tradition. Students at Kansas State Agricultural College had to make the long journey to downtown Manhattan to purchase their supplies, and in 1899, students were upset with the high prices of $5 for textbooks for the term.

Students decided to join together and form a student cooperative association where owning shares in the association would entitle students to a discount on supplies making them available almost at cost.

“I’m proud of them for wanting to do something about it,” Dan Walter, Aggieville historian said. “(But) somebody realized it was a lot of work. After about two years the whole thing about fizzled out.”

The co-op was forced to increase its prices to continue offering supplies and books to students. The co-op building was one of the first built in Aggieville and the first permanent structure. In 1889 the district was a faculty housing area, but after the student cooperative moved to its location on the corner, other businesses and retailers started coming into the area.

“Establishing that corner as a retail business was probably pretty significant at that time in history because there were faculty houses in the area,” Walter said. “The fact that there was going to be a permanent building, I think everyone can understand that that was the writing on the wall and it was going to go that direction.”

In 1909, KSAC student Elmer Kittell established The Varsity Shop within the walls of The Co-op Bookstore to outfit his fellow students with “All Kinds of Clothing for Man-Kind” as advertised in the 1912 Royal Purple, according to Aggieville Archives.

The Co-op Book Store continued to thrive through the 1940s and received a facelift in the mid-1940s where the brick work remained for over 70 years until Thursday morning. During this renovation the words “Co-op Book Store” were inscribed on the corner and can still be seen today.

By the late 1940s student enthusiasm for the cooperative had worn off and Ray Pollum bought the business, changing the name to The Campus Book Store. Pollum operated the business until the late 1960s.

Over the years the building has witnessed a horse-drawn trolley that carried students from campus to downtown Manhattan during the 1920s, many St. Patrick’s Day road races, New Year’s Eve celebrations, pep rallies and parades, as well as all of the students who have visited the retailers, restaurants and activities in Aggieville.

“That building has seen a lot of parades go by,” Walter said.

A quote from the 1932 Royal Purple shows the popularity of Aggieville and the role it had in student life, according to The Harrison Building Scrapbook: 1915-1998.

“It takes all kinds of people to make a world, and all kinds of students to make a college… Some young people come to college to hang around Aggieville with the gang. Aggieville students are not interested so much in courses as in loafing and throwing the bull and the coco-cola, the laboratory fee for which is anything from a nickel to two bits in the pocket and a line. C’mon, let’s go to Aggieville.”

Two men’s clothing businesses, Woody’s Men’s Store and Brentwood Clothing occupied the building after The Campus Book Store closed until Diane Meredith moved The Dusty Bookshelf from its location at 1131 Moro St. to the corner building.

Thursday’s fire not only claimed a piece of Aggieville history but also Meredith’s first business in Aggieville. The building that housed the former Dusty Bookshelf has been in the family of Sherilyn and Roger Bender of Springfield, Missouri since the 1940s and has been home to the used bookstore for the last few decades.

“I went to work for The Dusty Bookshelf in 1985,” Meredith said. “A couple started it that year. They were getting their PhD’s at K-State and I was their lone employee.”

A year later, Meredith bought the business for “no money at all hardly,” she said.

After a few moves around the Aggieville area, Meredith moved the used bookstore into its most recent location, where the store has remained until recently.

Kelsey McDonough, graduate student in biological and agricultural engineering, said that in her three years at K-State, she frequented the Dusty Bookshelf more than ten times. Being used to bigger bookstores such as Barnes and Noble, McDonough said she was excited to find a bookstore so full of character.

“I showed my dad The Dusty Bookshelf the first time he came to visit me at KSU and he absolutely loved the store,” McDonough said. “He would spend hours in there while I was in class or at work. When he learned that it was closed for the remodel, he joked that there was no reason for him to come back to Kansas.”

Although McDonough said she loved the comfy chairs, the atmosphere and the “treasure hunt” for the next great book, Meredith said she had big plans for the bookstore.

“The bookstore needed updating and things like that for a long time but we’ve been busy opening Varsity Donuts and opening Acme, and before that, Thread, and all these other businesses,” Meredith said.

Meredith and her husband also own Super Cub and are partnering with Orange Sky to open a yoga studio.

“We are are trying to reclaim as many buildings as we can and give them a new look, a new life,” she said. “So we ignored Dusty for a while even though our offices are there and that’s our home base.”

Finally, the time was right and Meredith was able to focus attention on “reinventing Dusty” when research from across the country led the pair to a new bookstore concept.

Meredith said the full concept was that of a living room where you could come and sit on squishy furniture, recline near the big windows or cozy up between stacks of books.

“You could nibble, eat, hang out with your friends, work or study,” Meredith said. “We were going to have an outlet at every table. You just line up with your laptops and study all day long.”

The new store was going to be rebranded as The Co-Op, a nod to the student cooperative from almost 100 years ago. The renovations were nearing completion when the fire took it all away.

Meredith said she hopes to get the new store back on track, but the next step is entirely up to the owners of the building. In the meantime, she has many other stores in Aggieville vying for her attention.

Walter said he hopes the insurance works out and the owners can continue their plans to improve Aggieville.

“It will delay the things they wanted to do, but then again maybe it will give them the opportunity to do things they wouldn’t have done otherwise,” Walter said. “It’s a tragedy, and it’s an opportunity.”

Meredith and her husband said they plan to continue to help improve the area because it is something that the community needs.