It isn’t unusual to see Kansas winning the Big 12, but never by the margin experienced this year. The Jayhawks won the Big 12 by four games this season; an excellent season that could be even better if they show out well in Kansas City this week.

West Virginia’s 87-76 win over Iowa State on Friday night allowed the Mountaineers to seal up the No. 2 seed in the conference tournament. To lose the conference by four games was disappointing, so perhaps WVU can make a run in the tournament.

All season people said Baylor would be the team to dethrone KU. After 18 games though, the Bears had their weaknesses exposed and now face a K-State team that will be fighting for its life on Thursday.

Iowa State caught fire late in the year, but couldn’t get over the final hump to be the No. 2 seed in the conference tournament. The Cyclones now face a red-hot Oklahoma State team with something to prove.

Not many teams can start 0-6 in conference play and finish in the top half of the conference, but Oklahoma State did just that. Brad Underwood’s squad has a chance to pull some big upsets in the Big 12 Tournament this week.

K-State was up and down all season long. The Wildcats had a big losing streak, but won their last two to keep postseason hopes alive. A win in the conference tournament would be huge for their NCAA hopes.

Texas Tech looked like a much-improved team to start the season, but would eventually falter down the stretch. The Red Raiders are heading in the right direction, it just might not be this year.

Jamie Dixon probably won’t have TCU in the big dance this season, which would be considered a bit of a failure, but the Horned Frogs were far from a failure this season. It didn’t go as they hoped, but they will be an improved team for seasons to come.

Oklahoma had nothing to play for but pride recently, and so it played for its pride. The Sooners got nice wins over K-State recently and TCU last week to finish the disastrous year off on a strong note.

Texas’ train wreck of a season is just one loss away from the final nail in the coffin. The Longhorns will need to be improved next season, or Shaka Smart might be doing some job searching. 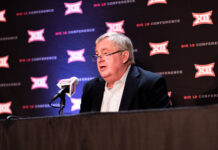