Such “tiny superheroes,” or better described as nanoparticles, which have the potential to identify and treat cancer faster and more effectively than chemotherapy, were the subject of graduate student Tuyen Nguyen’s first-place presentation at the second annual Kansas State Three Minute Thesis competition.

In the competition, graduate students from departments across the university were allowed only three minutes and a single PowerPoint slide to present their theses to an audience and panel of judges that were likely unfamiliar with their research, which encourages participants to communicate quickly and effectively while still engaging the general audience.

The preliminary round was held on Feb. 8 and consisted of 31 graduate students with presentations representing different disciplines, including communications, human ecology, chemistry and agronomy.

The top presenters from the preliminaries were then chosen to compete in the final round, held on Feb. 16. Nguyen was among those finalists.

After competing against seven other finalists in the final round, Nguyen’s research, titled “Tiny Superhero Fights Against Cancer,” on cancer-fighting nanoparticles, earned first place. The nanoparticles she called “tiny superheroes” — about one-millionth the size of a tennis ball — can work with MRI machines to identify cancer faster and can target and treat bone cancer cells more efficiently. These nanoparticles can better control the release of the drug, so they cause less side effects than chemotherapy.

Santosh Aryal, assistant professor of chemistry, oversees Nguyen’s research and aided her in finalizing her presentation and preparing for the competition. Aryal said he was pleased with Nguyen’s success in the competition.

“(Her success) was exciting,” Aryal said. “I was so thrilled about how she presented.”

Nguyen was also awarded the People’s Choice Award, an award given based on the audience’s vote.

“Winning the people’s choice award was a very exciting accomplishment,” Nguyen said. “That means not only did I convince the judges, but also convinced the people at the competition.”

Nguyen said the most challenging aspect of the competition was conveying her complicated and specific research to a general audience.

Nguyen said she did plenty of preparation to present on her cancer-fighting research, which she has been working on for two years.

Nguyen created 10 different slides before finally creating the single slide she used during her presentation. Her presentation was reviewed and edited multiple times by Aryal and by Nguyen’s friends and associates in the Nanotechnology Innovation Center of K-State.

“Tuyen is very hardworking, self-motivated and highly enthusiastic about what she is doing,” Aryal said. “Sometimes I have to go to her office and tell her to go home, (and that) sleep is important.”

Nguyen said she hopes her success will motivate more chemistry students to participate in the competition.

Reddi said her favorite part of judging the competition was seeing all the brilliant and enthusiastic students there are at K-State, as well as the high caliber of talent at the university.

“You could definitely see their passion in what they were doing and that they were probably doing this in their sleep because they love it so much,” Reddi said.

Aryal said he hopes to see the Three Minute Thesis competition continue to grow at K-State, as it is a way for students to practice communicating their research to a general audience while also developing their leadership abilities. 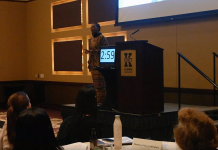 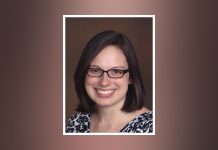