Every year Big 12 fans flock to the Sprint Center in downtown Kansas City, Missouri, for the annual Big 12 Championship. On Wednesday, the madness will begin. This year’s tournament should be interesting as this season was arguably one of the deepest the conference has been from top to bottom in recent history.

The first two games will start tonight at 6 p.m. with the eighth-seeded TCU Horned Frogs set to battle the ninth-seeded Oklahoma Sooners. The winner will play No. 1 seed Kansas on Thursday. In the second game of the double-header, two Texas schools will face off and the No. 7 seed Texas Tech Raiders go up against the 10th seed, last-place Texas Longhorns. The winner of this game will advance to play No. 2 West Virginia in the second round on Thursday.

The two games already set in stone for Thursday are the matchups between No. 4 Iowa State and No. 5 Oklahoma State, and No. 3 Baylor and No. 6 Kansas State. The Cyclones, Cowboys and Bears are all locks for the NCAA Tournament, according to ESPN bracketologist Joe Lunardi. However, K-State is not. Right now they are in his “First Four Out.”

Frank Mason III, senior guard, KU — Mason is close to the top of almost everyone’s list for Player of the Year and has already been named the Big 12 Player of the Year. He’s averaging 20.5 points per game and has posted 25 or more points in six contests this year. The senior led the Jayhawks to their 13th-straight regular season Big 12 title.

Jeffrey Carroll, junior guard, OSU — Carroll is one of the most improved players in the Big 12 this season. At times overshadowed by star point guard Jawun Evans, he’s second on the team with 17.3 points per game, 6.6 rebounds per game and shoots 43.8 percent from behind the 3-point line. Carroll has put up 20-plus points 14 times this season, including a season-high 27 on Saturday in a near upset of Kansas.

The Cyclones and Cowboys will tip off at 11:30 a.m. on Thursday, and the Bears and Wildcats are set to square-up later that night at 8 p.m. CDT. The semifinals will follow on Friday, and the championship game will be played on Saturday. 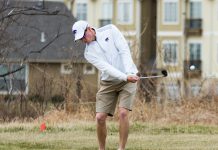 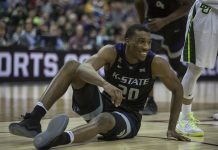