The raucous atmosphere in the patio of O’Malley’s Alley bar turned silent Wednesday evening, as friends and family of Jack Ayres and Olivia Baalman strained to listen to the tiny sound of the radio speaker. Months of preparation and campaigning had led to this moment.

The lull in the noise was brief; however, and the radio only managed to sound off the name “Jack” as the crowd immediately roared back in reaction to the announcement that Ayres had won the Kansas State University student body presidency alongside running mate Olivia Baalman.

Ayres, senior in chemical engineering and current speaker of the K-State Student Governing Association senate, said he was humbled to be around so many people who have supported him tirelessly through the election cycle.

“I’m feeling a whole wave of excitement and appreciation for everybody that has done everything, from supporting us to working with us,” Ayres said. “Even the student groups we spoke to, or the folks who didn’t vote or vote for us, it doesn’t matter, because all the input we got from the entire process is a lot of what will make this next year very successful.”

Ayres said despite the large number of people, he wanted to thank every one individually.

“I’m going to write thank-you notes,” Ayres said. “We had such a large number of people who were able to offer their time and services and expertise, and I want to make sure I can thank every one of those individuals who have done that.”

Baalman, junior in computer science and current SGA director of health and safety, said she is eager and happy to have the opportunity to serve as student body vice president.

“Right when Jack’s name was said, kind of an overwhelming feeling came over us,” Baalman said. “We were definitely very excited and grateful for this opportunity and the support we had. We’re happy so many people turned out in the elections this year, and we’re incredibly excited to serve as student body president and vice president this coming term, so that’s definitely a great feeling.”

Jessica Van Ranken, senior in political science and current student body president, offered her congratulations to the pair in a Facebook post.

“I am so excited for you, the journey you’re about to continue, and most importantly, the student body that you have the opportunity to impact,” Van Ranken said. “It’s been an absolute honor serving, and will continue to be over the next month until I officially hand over the reins in April. I’ve had the experience of a lifetime pouring my heart and soul into serving the K-State student body, and I know Jack and Olivia will too.”

Ayres and Baalman faced a difficult campaign after barely winning the primary election by 48 votes — or two percent of the primary vote — over opposing candidate Matt Mindrup, sophomore in biology.

In the general election, that difference was not significantly larger, and Ayres and Baalman edged out Mindrup and running mate Emily Zwick, sophomore in agribusiness, to win the student body presidency with 52 percent of the vote.

“This election, specifically, was so close and competitive,” Ayres said. “A 46-vote difference in the primaries meant that students were fired up. That forced both teams to be better than they would have ever thought they needed to be in order to try to win the presidential election. It really forced us to go out there and get those votes from people that wouldn’t typically vote. The strategy was to get the vote out, but get the word out, and get votes from people who didn’t vote the year before.”

Ayres said he deeply respected Mindrup’s platform and would work with him to affect change for students.

“We’re actually meeting with (Mindrup) Friday,” Ayres said. “It was set up before the results of the election to meet with the other candidate(s), and we will discuss their platform specifically. They brought some really good points for change both externally and internally, and we want to make sure we commit ourselves to making that happen.”

“It’s been hard trying to balance school and SGA, not to mention the campaign,” Ayres said. “It’s been a challenge to get out and campaign, especially in going out to groups that meet on Tuesday nights at the same time as the Tuition and Fees Strategies Committee, which I serve on. There’s only 24 hours in a day, and sometimes that’s difficult, but I plan ahead because I have to.”

Baalman said it has been quite an experience to campaign.

“The past month has definitely been busy. We reached out to a lot of students, engaging with them and hearing their feedback as well as their ideas to incorporate into our platforms,” Baalman said. “It’s been a really big learning process. The biggest challenge was that 24 hours sometimes isn’t enough time in the day. It’s not as long as we wish it was, we couldn’t be everywhere at once, but it’s been awesome to have the support of the people on our campaign.”

Many of Ayres’ friends said they were astonished and proud of Ayres’ dedication, which at some points, made it seem like he did not even sleep.

“The thing about Jack is the kid never stops,” Davis Millard, senior in sociology, said. “He is going 100 mph every day. You can see him at 10:30 (p.m.) at the library, then you can see him at 7:30 the next morning. He sleeps very little and just dedicates all his time to class and SGA. That’s the thing I’ve seen about Jack — he locks in on something, and if he says he’s going to do it, he does it.”

Millard said Ayres will do a good job of representing and interacting with the student body.

“If you watch Jack walk across the quad, he’ll probably stop about 20 times to say hello to somebody, so I think Jack already has a connection with the student body,” Millard said. “To me, that will take him far in representing us. He’s already in tune with the student body, so representing them is going to be very easy and it’s going to come naturally to Jack. That’s why a lot of people were attracted to his campaign.”

Leader long time in the making

Ayres’ parents, Mike and Suzy Ayres, were at the watch party to witness as he was announced as the winner of the election. Mike said his son had demonstrated leadership qualities since a young age.

Suzy said Jack had first shown interest in the position on a high school visit to campus.

“I was telling some friends when we visited K-State the first time, we happened to go by the SGA table and he said ‘Wouldn’t it be cool to be the president of the student body at K-State?’” Suzy said. “At the time, he was president of student body at his high school, and I told him ‘Oh yeah, buddy, it’s a big school.’ When he got into senate, I was really proud of him. He’s got a lot of heart, and he goes for what he feels strongly about.”

Owen Dahm, sophomore in biochemistry, said he has known Ayres since second grade and believes he will make an excellent president.

“He’s been involved in student council since sixth grade,” Dahm said. “He knows what can be done, and he doesn’t make goals that he can’t accomplish. He works like clockwork. It’s almost as if his goals are an itinerary list.”

“I think he’s just like the Energizer bunny, he just keeps on going and doesn’t quit,” Bouse said. “It says that he’s relentless and won’t give up until he gets the job done.” 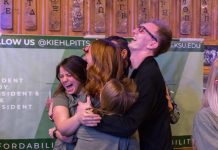 23 seconds too slow: The beginning of the Free Hugs Project