The season was on the line. If the Kansas State men’s basketball team lost they would likely not hear their name called on Selection Sunday. The game was simple. Win and they’re in.

“Couldn’t be more proud of our guys,” head coach Bruce Weber said after the game. “They fought through adversity, fought through injuries. They’ve stayed coachable. They’ve stayed together and just a great run here. We talked last week, March Madness started last week for us at TCU and continued at Bramlage (Coliseum) and now we’re at the Sprint Center, and we beat a team that’s one of the top RPI teams in the country.”

K-State used a commanding second half performance to pull away from the Baylor Bears in the last quarterfinal game of the Big 12 Championship Thursday at the Sprint Center in Kansas City, Missouri. The Wildcats made their free throws late to hold on 70-64.

It was a tale of two halves. The first half had the look of a physical, defensive battle. Both teams struggled to shoot the ball. K-State shot just 41.7 percent in the half and got out-rebounded 19-10. However, they were able to stay in the game thanks to nine Baylor turnovers in the half. The teams went into the break tied at 25.

A lot of the offense came on the back of sophomore guard Barry Brown. He ignited the Wildcats’ second-half run with seven straight points culminated by a four-point play after he was fouled on a made 3-pointer. The play ignited the Wildcats and helped extend the lead.

“Feel like it came from my teammates,” Brown said. “We ran a couple of plays and some of it was just, like the one and and-one 3, Wes was able to find me. But I credit my teammates for getting me open and I had to reward ’em by making the shot.”

K-State fed off the energy provided by Brown, as well as some key plays from players off the bench.

Freshman forward Isaiah Maurice made some tough baskets down low in the first half to keep K-State in the game. In the second half, senior guard Carlbe Ervin threw down a powerful dunk. Not long after, freshman guard Xavier Sneed hit a big three from the corner to keep the Cats’ lead sizable.

“They did good,” senior forward D.J. Johnson said. “Isaiah came in and gave us quality minutes. I think he had eight points or so, and same with Xavier Sneed. And I think Isaiah had eight points in eight minutes and he pulled down a couple of rebounds, so bench production was great.”

The Wildcats hit their free throws down the stretch to seal their spot in the semifinals tonight against West Virginia. The Mountaineers took down Texas earlier in the day.

K-State likely secured a spot in the NCAA tournament with the victory over Baylor, but Weber said the Wildcats should not settle for just one win in Kansas City.

“We are not done,” Weber said. “We told them the only way you know you’re in the NCAA Tournament is to win the (Big 12) tournament, so we took one more step toward that. And now we’ve got to worry about West Virginia and that’s what we’ve got to focus on.” 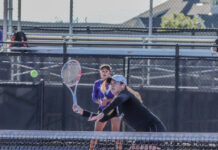 ‘We put our hearts out on the court’: Tennis falls short at Big 12 Championship

Second-half scoring droughts plague men’s basketball in loss to No. 10...