Fakers preparing for Manhattan’s fakest holiday had more than green t-shirts and green drinks to worry about.

After a week of warm spring weather, one may have expected a sunny day while celebrating Manhattan’s fakest holiday.

Come on Kansas how can you tease us with beautiful weather like this then call for snow on fake patty's day! #kansasweather #FPD17 ?

But that snowflake icon in the weather app was no typo; it was just Kansas being Kansas.

And it was not one of those crazy jokes where Kansas pretends there is going to be bad weather and then switches it up at the last minute.

Imma need this whole snow tomorrow thing to be an elaborate joke by the weathermen. Come on Kansas switch up like you always do! #FPD17

Rather, fakers woke up to below-freezing weather with a promise of snow to hit at about 11 a.m. And not even K-State head football coach Bill Snyder’s famous windbreaker could protect Aggieville from the snow.

@BillSnyder_KSU if you could please send your windbreaker to block the snow on this holy day, that'd be great. #FPD17 ?

And while a few drinks may have warmed the people up, it did not warm mother nature up.

Just let mother nature get a couple drinks in her, that'll warm her right up. #FPD17

It was OK though, as not even this snowy weather was enough to stop the fakest holiday of the year.

US KANSANS VIEW TORNADOS AS A REASON TO START DRINKING DO YOU REALLY THINK A LITTLE SNOW COULD STOP US ON FPD??

It's pretty dang cold out today. Our officers will be dealing with winds and what looks like snow as well. These guys are rock stars. pic.twitter.com/7CWgXDv7gJ

They were not the only ones who prepared. This Fake Patty’s Day required more than some lucky green shirts.

Now this is planning ahead! And also the biggest umbrella I've ever seen! pic.twitter.com/sSfyAfbNaC

Apparently not everyone got the memo.

The ❄️ is real. Time to trade out those heels for a pair of boots. Your tail bone will be grateful!

Let’s just hope they heard this solid piece of advice.

Remember, even on Fake Patty’s Day, the green snow is off limits…

So mark your territory — without green or yellow color — in the snow.

"Wot In Fake Paddy's Day Celebration"
Have fun, stay warm and be safe out there. #FPD2017 pic.twitter.com/VuX6je9zNm

The frat next door is playing a dance remix of "Let it Snow." Happy #FPD17.

The snow might even be worth a thumbs up.

Or a game of soccer.

Just don’t expect an Aggieville snowball fight; there’s not quite enough snow for that.

If it's snowing on #FPD17 then it might as well snow enough so we can have an epic Fake Pattys Day snowball fight in #Aggieville! #MHK

And in case it was not clear, the holiday is fake news. The weather is not.

"I honestly thought the snow was fake news" – @AJ_Klenc

For real though snow is ruining FPD.

Did the snow win or did Fake Patty’s Day win? Apparently it is a tie. 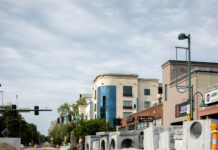