Located north of King Hall and south of the Staley School of Leadership Studies, a “spork-like” statue has been a component of Kansas State’s campus for over 50 years. Constructed in 1969, the 20-foot tall white fiberglass structure stands tall over the hundreds of students that pass by it each day.

The sculpture was built in collaboration with the “Art in Situation” workshops, a series of summer seminars for students that took place from 1969-1971 aimed at creating art pieces across campus for public enjoyment. The workshops were funded in collaboration between several departments as well as the Ford Foundation. Upwards of five sculptures were added across campus, but few of the structures created still stand today.

After construction, James Wentz, the artist responsible for creating the sculpture near King Hall, said that he actually had constructed the piece with no true object in mind and instead wanted the sculpture to be left up to individual interpretation.

Kelsey Kastilahn, freshman in animal sciences and industry, said she has wondered what the sculpture is actually supposed to represent.

“When I walk by the sculpture on the way to class, I often wonder what it is supposed to be and what someone thought when they were building it,” Kastilahn said.

Although commonly referred to as a fork or spork, many other ideas have circulated over the years about the true nature behind the sculpture.

Some believe that it is meant to look like a chess piece, as it is next to King Hall, a claw to represent Willie the Wildcat and a trident.

Thomas Meek, freshman in finance, said he thinks the statue has a more literal meaning.

“I think it may be meant to symbolize the literal fork in the road college students are at between childhood and what’s to come after graduation,” Meek said.

Whatever the interpretation may be, many see the sculpture as a reminder of their college experience. Mark Taussig, Project Manager for the Division of Facilities at K-State, said he has fond memories of the sculpture on campus.

“Now with my job, I’m involved in taking care of all of the sculptures on campus including the ‘fork,’ but I remember it from when I was at K-State myself, wondering what it was every time I walked by,” Taussig said. 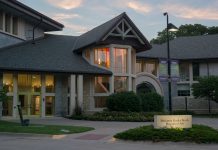 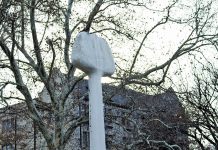 Up for interpretation: Artful campus sculptures have little-known histories