Thea Meussling is a graduate student in ceramics, but she is also known as “Tooflady.”

“(Tooflady) is very fearless,” Meussling said. “She likes to ask people questions about themselves and learn about different people while also making jokes, like says she’s from the Appalachian Mountains in the southernmost part of Florida, or that her best friend is Stone Cold Steve Austin.”

Tooflady is Meussling’s alter-ego character that Meussling has been developing over time. Meussling describes Tooflady as a crafty, fearless girl who has an immense respect for the working class.

“She’s a louder version of myself,” Meussling said.

Thea Meussling lived in the Mark A. Chapman Gallery inside Willard Hall for a week starting March 8 as a part of a master of fine arts exhibition. During her stay at the gallery, Meussling has been performing live as Tooflady without breaking character.

“This is something I’ve never done before,” Meussling said. “I’ve really pushed myself to develop her character better.”

“During the day there are always people in here visiting me,” Meussling said. “I’ve never gone more than 45 minutes without somebody coming into the gallery.”

Meussling does not break character as Tooflady in the presence of visitors in the gallery and tries to convince people she is a real person.

“(Meussling) really has set a different kind of example for other graduate students to follow and be inspired by,” said Shreepad Joglekar, assistant professor and area coordinator in photography.

Joglekar said what Meussling is doing with Tooflady is creating a challenge for her to push through in a very contemporary genre.

“I think doing this type of performance art is really enhancing the cultural scene. It’s done a wonderful thing for our community,” said Katherine Karlin, associate professor in English. “I think Kansas State in many ways has become a very avant-garde cultural Mecca, and I think this goes in that direction.”

Meussling said she wants to continue her performance art for a long time.

Meussling plans to take her art to new places, including Philadelphia and Louisiana, to learn more about different kinds of people, accents and culture.

“I’ve really pushed myself to complete this,” Meussling said. “I see it as a stepping stone to what will come in the future.” 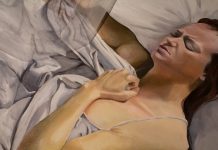 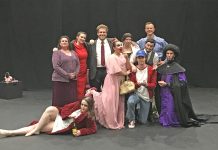 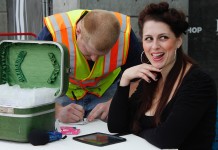