If the NCAA men’s basketball tournament came down to a battle of budgets instead of baskets, Kentucky would beat Duke in the championship game $18.9 million to $17.9 million.

Using 2015 numbers, which is the most current data available that is compiled by the U.S. Department of Education’s Equity in Athletics Data Analysis, the Collegian filled out a bracket based solely on program expenses.

If financial investment by a university’s athletic department in a basketball program were the determining factor in winning on the court, none of the No. 1 seeds would be in the Final Four. Instead, the Final Four would consist only of No. 2 seeds: Kentucky, Duke, Louisville and Arizona.

Of the No. 1 seeds, Kansas’ $11.6 million would be the only one to make the Elite Eight. Wichita State’s $6.9 million would have taken them as far as a loss to Kentucky and a repeat of 2014.

The greatest financial differences in first round matchups are Kentucky versus Northern Kentucky’s $1.6 million, Louisville versus Jacksonville State’s $1.1 million and Duke versus Troy’s $1.4 million.

Other than Kansas, West Virginia’s $9.3 million and Baylor’s $8.8 million were the only other Big 12 schools to make the Sweet 16 in the bracket determined by budgets.

Former K-State head coach Dana Altman would lead Oregon to beat Creighton, another school he formerly coached at, based on the financial bracket.

Butler’s $4.8 million made for the lowest budget to win a first-round game in the budget-based bracket, but it still more than triples opponent Winthrop’s $1.3 million. New Orleans was the only one of the 68 universities in the tournament with program expenses under $1 million.

The average program expense among the 68 teams was $6.3 million. The median is $6.9 million, using the average of the No. 34 and No. 35 teams, Iowa State and Notre Dame. The standard deviation is $4.1 million.

The Collegian’s bracket didn’t make it past the First Four unscathed. That was good news for Wildcat fans, because K-State’s $6.8 million would have lost to Wake Forest’s $7.6 million on the tournament’s first day.

The biggest budgetary-based upset so far is Middle Tennessee’s $2.7 million first round win over Minnesota’s $8.2 million. Minnesota would have lost in the Sweet 16 based off program expenses.

Vanderbilt’s $8.2 million should have gone to the Sweet 16, but they were upset by Northwestern’s $6.8 million. Maryland’s $7.6 million also bowed out early after a loss to Xavier’s $5.7 million.

The only other upset as of Thursday night’s games was USC’s $5.3 million winning over Providence’s $7.9 million in the First Four.

Louisville does beat Kentucky based on one financial statistic: revenue. 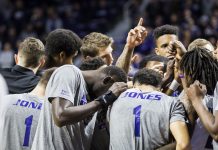 OPINION: K-State can make it to the NCAA title game next season 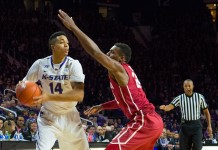 What to watch: college basketball 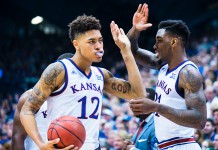