Christine Rock, junior in food science and political science, is finishing a “whirlwind” of a year as Miss K-State 2016.

During her time as Miss K-State 2016, Rock said she has had the opportunity to increase her visibility on campus, which has included participating in K-State activities like the homecoming children’s carnival.

In the past, Miss K-State has been responsible for taking pictures with children and signing autographs. Rock, however, took her role to another level.

Instead, Rock said she had the children participate in a letter-writing campaign to support an education bill. The children shared why they thought education was important, which Rock believes encouraged Sen. Pat Roberts, R-Kansas, to show support for the bill.

A panel of judges selected Rock, who represented her sorority Kappa Alpha Theta, as Miss K-State 2016 last April from a pool of 20 contestants.

Rock said she never pictured herself entering this type of competition, as she was surprised to find out her sorority members had nominated her.

Upon being nominated, she said she immediately began preparing, despite the initial shock.

The competition, hosted by Delta Upsilon, consisted of four rounds that are more of a competition than a beauty pageant, Rock said: Wildcat, talent, career and question.

Rock said she thought it was her talent round that put her above and beyond the competition.

She memorized Blackalicious’ “Alphabet Aerobics,” via a YouTube video of Daniel Radcliffe performing the rap on “The Tonight Show Starring Jimmy Fallon.”

“I remember her sitting in our room and practicing the rap for hours on end,” said Lesley Frohberg, junior in regional and community planning and Rock’s sorority sister. “I even memorized it from listening to her so many times.”

Along with the substantial effort Rock put into the rap, she said her dedication to representing her organization to the best of her ability carried over into all aspects of the pageant.

“A lot of what I presented was my passion for food security and food justice,” Rock said.

She said even though she remained confident throughout her performance, she was still surprised when she was announced as the winner.

After Rock assists with the crowning of Miss K-State 2017 in April, she has plenty of passions and activities to keep her busy.

“I think the president of the United States does less than Christine sometimes,” said Kari Porter, senior in journalism and mass communications and Rock’s roommate.

One of Rocks’ many campus roles includes being the president of the Food Recovery Network. The group takes leftover food from the Ahearn Fund Student-Athlete Performance Table and delivers it to Manhattan churches, where it is then redistributed to those in need.

Another role Rock plays is the president of the food science club, which provides networking opportunities for food science majors. She has also helped create an on-campus food pantry and said she dealt with “a lot of meetings and writing” to get it started.

RESULTS, an international non-profit organization, has allowed Rock to combine her passion for food with the fight against poverty. Earlier this semester she had the opportunity to travel to Washington, D.C., with the organization.

“It’s an exciting way to be a college student who cares about a lot of things,” Rock said about RESULTS. “Instead of talking about things on Facebook, I went right to the source.”

Rock said she also plans on interning at a bakery lobby group in Washington this summer, where she will advocate on behalf of those in the baking industry.

Although advocating for for-profit companies will be different than what she is used to, Rock said she is ready to see a different side of advocacy in Washington.

This year’s Miss K-State 2017 competition will be held on April 11 at 8 p.m. in McCain Auditorium.

Logan Green, Delta Upsilon’s vice president of philanthropy and sophomore in chemical engineering, said 2017 is expected to have the largest attendance to date. The fraternity estimates there will be approximately 1,100 audience members.

Rock, who is currently working on a new rap to perform, will emcee the competition with Green.

She admits she will miss serving as Miss K-State.

“Luckily, they buy a new crown and trophy each year, so I get to keep those,” Rock said. 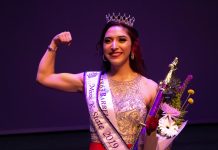