After repeated requests from students for a change in food quality, Kansas State’s dining halls will upgrade from their current food supplier and contract out to Aramark, the nation’s leading prison food supplier.

“We are always looking for student feedback, and what we’ve heard and seen is that students want tasty, healthy and nutritious food,” said Charles Bumble, director of Dining Services supplier relations. “At the same time, if we can save millions of dollars at the same time, who would pass that up?”

The change in food supplier is expected to save more than $2 for the Housing and Dining Services department, following the almost finished construction of Kramer Dining Center and Wefald Hall, at a projected cost of $70 million in 2013. It was not immediately clear if any of the saved funds would be used to add a ceiling to Kramer.

Dining hall managers said they do not expect an immediate, drastic change in menus, although gruel will now be a primary ingredient in all dishes.

Next semester, Dining Services said it hopes to offer a modified version of Aramark’s Nutraloaf — a piece of material that can very loosely be defined as a bland piece of “bread” made up of a mixture of flour, vegetables, fruits and possibly trimmings from the floors of the university’s meat labs. University administrators said they will look to put a K-State spin on the loaf.

“I think we’ve got a real opportunity here,” said Pat Bosco, vice president of student life and dean of students. “Here at K-State, we’re all about family and solidarity, and what better way than to market our new dining center offering as Willieloaf? It’s what K-State Cats eat!”

“You know, back in my military days, we really had it rough,” Myers said. “We didn’t have any of these newfangled dining utensils. We used turtle shells for bowls, and we liked it.”

In the dining halls, students remained ambivalent to the change, although it was not clear if the dull food was a large factor in the dull expressions.

“I mean, I can’t really complain too much,” said Chadwick Pennywise, transfer student from the University of Kansas. “At KU, we could choose between ‘soylent crimson’ and ‘soylent blue.’” 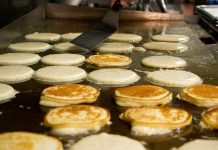 By the numbers: Where is your meal plan money going? 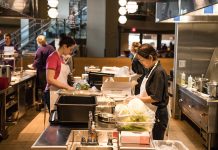 Servers, librarians and IT staff: Student employees by the numbers