A walk from the Kansas State Student Union to the Call Hall Dairy Bar is sure to encompass not just one, not two, but many campus squirrels chasing each other across campus, scampering up trees and searching for food.

As previously reported by the Collegian, K-State is one of only seven universities ranked as a five-out-of-five-squirrel school. The survey, which was run by Wildlife Patrol Inc., ranked campuses on the size, health and behaviors of their squirrel populations.

K-State estimates that squirrels outnumber students three to one, for a total estimate of 72,000 campus squirrels.

“The campus squirrels are truly a part of the K-State experience, so I am not surprised to hear we are ranked so high on squirrel population,” said Escker Lee, professor in park management and conservation. “K-State is about the people and the squirrels.”

“The squirrels are not native to this campus,” Lee said. “Actually, 1,868 squirrels were brought in by administration in 1962 in an attempt to have a recruiting technique that the University of Kansas did not have: squirrels.”

Lee said the university had to jump through many hoops to bring squirrels of that quantity to campus. This included monitoring the weather, studying the health of the trees and creating an extensive 16-year plan on how K-State would ensure the squirrels would thrive in the Manhattan area.

“It helped that we are a land grant, research-based school with lots of interest in animal agriculture,” Lee said. “This is the ideal place to study squirrel populations and behaviors.”

Alvin Munk, junior in wildlife and outdoor enterprise management, said his favorite class at K-State was studying the history of the campus squirrels.

“I always knew campus squirrels were a big deal even before coming to K-State because I followed the KSU Campus Squirrel‘s twitter page,” Munk said. “I just had little idea on how the squirrels became so popular here. It’s not just because they’re fun to watch when I procrastinate my studying, but because it’s one more factor that makes us better than KU.”

Munk said he studied in his class how the population of squirrels increased from under 2,000 to over 72,000 so quickly.

“The squirrels here are happy,” Munk said. “Based off squirrel behavior research, our squirrels have much more positive behavior patterns than the average squirrel.”

Lee said the squirrels are happy here because of three main reasons: the purple, the students and the closure of campus roadways.

Munk said the many students on campus keep the squirrels alert and attentive, thus leading to a healthy blood pressure.

“And of course sometimes the squirrels get scared by the students, so the squirrels will run away, but that keeps them fit,” Munk said.

The squirrels have also had a higher survival rate since the university has turned campus roadways into pedestrian walkways.

“I was a huge advocate for the pedestrian walkways,” Lee said. “We don’t need squirrel roadkill on this campus.”

Many K-State students agreed that the campus squirrels work as a recruitment tool.

Steven Scrat said the squirrels were the leading reason he chose to attend K-State.

“I know a lot of students pick their school based on sports, school reputation or size and location, but that was not the case for me,” Scrat said. “For me, it was all about the squirrels. And it was one of my best decisions ever.”

Crea Shir said she will be forever thankful the administration of 1962 brought squirrels to K-State.

“K-State also has some of the happiest students nationwide, which can’t be a coincidence,” Shir said. “Squirrels equal happiness.” 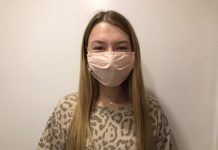 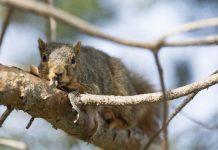