The music halted in the Kansas State Student Union’s Grand Ballroom Saturday evening. Nearly 300 audience members moved to the edge of their seats, waiting for Jordy Searcy, contestant on season seven of NBC’s “The Voice” to announce Stephanie Farney as the winner of this year’s K-State Voice competition.

Saturday marked the finale of the K-State Voice competition with Farney, sophomore in mechanical engineering, coming in first place followed by Adam McKinney, junior in communications studies, in second, and Kage Edgar, junior in music education, in third.

Applications to compete opened and closed in February. Applicants were narrowed down to 12 contestants who auditioned in front of the competition’s coaches and judges, then nine singers were chosen from the 12.

The winners were determined by votes texted in by the audience.

Farney, a member of “Team Patricia,” competed in last year’s competition but did not place.

“I was a lot more comfortable on stage this year, as opposed to last year,” Farney said. “It felt like I was doing what I normally do.”

With the comfort of experience, Farney allowed herself to joke with the audience.

This year, she auditioned with the song “Vegas” by Sara Bareilles, but the song that earned her first place and $250 in prize money was an acoustic version of “Highs and Lows” by Emeli Sandé.

“The original version of that song is a little higher up in my range,” Farney said. “We actually made the decision last minute to take it down a half step because it’s allergy season and I didn’t want to risk it.”

In preparation for her final performance, Farney worked closely with coach Thompson to nail the song’s higher notes.

Richt praised Farney for her effortless and natural sound, as well as Thompson, who was also pleased with her performance.

“She did wonderful,” Thompson said. “I was proud.”

McKinney, winner of second place and $100, sang Ed Sheeran’s “We Found Love” with a segue into “Lean on Me” by Bill Withers.

“You are a real musician,” McCornack, McKinney’s coach, said in response to his performance.

Edgar, winner of third place and $50, was also a member of McCornack’s team. His rendition of “Death of a Bachelor” by Panic! at the Disco earned him a generous applause early on in the competition.

“I thought Kage should’ve been in the top three, and he was,” McKinney said. “He’s an awesome dude. I have a lot of respect for him.” 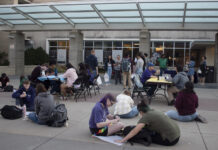 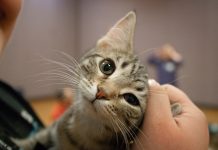