Home News Campus Rep. Marshall hosts ‘one of the most vocal’ town halls in Manhattan

With red and green cards — not supplied by Marshall — in hand, the constituents of Kansas’ “Big 1st” congressional district argued, questioned and expressed frustrations with the congressman during the one-hour town hall.

After hands continued to raise red cards — which symbolized disagreement with the congressman — during his opening statement on tax reform, Marshall asked if green cards were ever passed out.

“You’re not going to see many of those,” an attendee shouted from her seat in the back of the room as others laughed and groaned.

Marshall, who is a Great Bend, Kansas, obstetrician, promised to the people he is not a “typical politician.”

“Many of these issues … may not be as black and white as they seem to you,” Marshall said. “I do try to put on my physician hat every day and listen to the problems through everyone’s set of eyes and not just my set of eyes. I try to figure out how it impacts people.”

As those in the audience continued to express frustrations with Marshall and his lack of responding to criticism over issues including health care, immigration and the federal budget, Marshall said he hosted the town hall to do more listening than talking, and came to hear the questions and concerns of those he represents and not just lecture them.

“I’m not the person who is going to stand up and argue with anybody or judge you,” Marshall said. “This is your time to ask questions and make a statement.”

Marshall, who was elected to serve in Congress in November, said this was one of the most vocal groups he has hosted during a town hall.

Marshall said tax reform is the biggest issue Congress will tackle next and there are several priorities he has that can help Kansans: repeal the death tax, continue cash accounting for farmers and decrease corporate taxes to grow the economy and create more jobs.

Red cards were raised as he mentioned lower corporate taxes.

Many voiced concerns that tax breaks at the federal level would mirror the budget situation in Kansas under Gov. Sam Brownback’s tax policy.

In a private interview with the Collegian following the town hall, Marshall said what does not work at the state level won’t necessarily not work at the federal level and vice versa.

“I think most people realize tax policy at the federal level is different than the tax policy at the local level,” Marshall said. “Apples and oranges. Kansans are very gun-shy with anything associated with Gov. Brownback’s tax policy, and I get that.”

“I absolutely believe if we lower the corporate tax rate in the United States from 35 to 20 percent, that we’ll repatriate a lot of money and can use that for infrastructure,” Marshall continued. “It will start growing jobs for us.”

Marshall said he wishes those who attended the town hall would begin to look at issues such as immigration and national security from varying points of view, rather than just their own.

“That’s truly what I tried to do,” Marshall said. “Immigration is a national security issue, it’s a school issue, it’s a social issue, it’s a job creation issue. It’s very complex with lots of different sets of eyes. It’s a law enforcement issue. And right now we’ve been set up for failure.”

Marshall said that when he walked into Congress, there were anywhere between eight million and 20 million unregistered immigrants in the U.S.

“So what do we do now?” Marshall asked. “It’s impossible to load these people on a train and send them back home; that would break our Kansas economy. At the same time, I think Americans want us to secure the border. I don’t necessarily think that means to build a wall, but I do think Americans want a secure border. I just encourage people to keep looking through other people’s eyes rather than just their own.”

Marshall said doing nothing is not an option when it comes to health care.

“This legislation needs to be more than just Medicaid,” Marshall said. “It is not working. (The Poor) don’t have good health care. One third of doctors don’t accept Medicaid anymore. So the Medicaid program that exists, it’s not helping; it’s not working.”

Marshall said he believes society, physicians and hospitals do have an obligation to take care of the poor, and he did support a replacement of the Affordable Care Act.

“I believe at the end of the day with all my heart and mind the new health care bill would provide more coverage for more people at less cost, and would help keep Kansas hospital doors open,” Marshall said. “Without any doubt, this health care legislation would have increased funding for hospitals in Kansas and literally saved them.”

Less time at the microphone

While those in attendance voiced frustrations that Marshall was not answering all questions and voicing his position on policies, he said he hopes they left realizing they have a congressman who listens.

“Of the hour and 15 we spent in there, my time at the microphone was less than any other congressman or senator that typically comes,” Marshall said. “I’d like to think that maybe everyone in the audience got to talk about their issue and concern, rather that just screaming and yelling about one issue.”

He said he is still concerned about the issues, including the economy, national security, immigration and health care, but he hopes Kansans realize they do have a voice again. 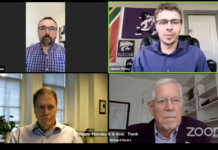