In U.S. cattle production, it typically takes 14 to 16 months to raise an animal for meat consumption. This development process has several phases for a market animal to go through, including birth, weaning — taking the calf away from its mother — and then growing in a feedlot to develop muscle that will be harvested for meat.

At Kansas State’s Beef Stocker Unit, the program strives to provide an avenue for backgrounding beef cattle and research and continues to focus on current issues of importance to beef producers in the industry.

“K-State is really a go-to place for students to come and to learn about the agriculture industry, and there are many things happening within our department that even helps recruit students from all over the country to attend our university,” Dale Blasi, professor and extension specialist in beef cattle nutrition and management, said.

“What is really great about the unit is that it is so close to campus,” Blasi said. “We typically have one full-time graduate student and six to seven undergraduate students during the fall and spring semesters, with some of them working there for several years while they’re in school, and we really get to be like a family out there.”

The students at the facility are mainly in charge of tasks such as helping build fences, daily maintenance projects, feeding the cattle and observing them each day.

“This program is really great for the students as they are able to publish their research in a series of growing techniques and experiments, achieving efficient cattle gain with less manure output,” Blasi said.

Tyler Spore, graduate student studying ruminant nutrition with an emphasis on stocker cattle, said he had experience prior to working at the unit.

“I had previous experience with cattle before I started working here, but only from a cow and calf operation perspective,” Spore said. “I’ve always had an interest in learning about a stocker operation, so I’ve had a really great experience in this unique program where we are able to pinpoint nutrition and health on individual calves at the pen level and also the pasture level.”

Spore described how there was a gap between his involvement in undergraduate research in animal science at the unit and the time when he actually started working there as a graduate research assistant. He explained that the unit has 32 pens and 15-20 small pastures used for research that he has been able to be a part of to develop his knowledge and research of beef cattle production.

Along with these daily tasks, there are also several research projects that the students are able to conduct and develop themselves with the numerous head of cattle.

One is focused on ruminant nutrition in younger cattle on a stocker level, and is conducted by a graduate student.

“All of the students who work there have had some previous exposure to cattle, but some of them have had a limited exposure,” Bill Hollenbeck, manager of the unit, said. “It takes time to acquire knowledge in cattle production, but they learn as they go and continue to work and gain more knowledge of the cattle industry. The students who aren’t as experienced learn a lot throughout their time of working there.”

The Beef Stocker Unit hosts an annual field day each fall at the facility for 300-400 industry producers who are invited to hear about the different research developments that are currently going on in the program.

The day consists of various demonstrations and other presentations by faculty, staff and students from within the stocker unit.

“It’s really important that we have research out there that is important to the industry,” Blasi said. “We have producers come in from all over and are able to look at the research that our undergraduate students have done that is relevant for them. This opportunity is really great for the students to meet these people in the industry and make those connections.”

History of the unit

The beef stocker facility has been maintained and operated since the mid-1940s and started with 13 equal-sized pastures for yearling cattle to graze and be a part of student research to calculate health and nutrition of high-stressed calves that transition into growing diets.

It was originally named the K-State Animal Science Range Unit, but was refocused and renamed in 2004 to the K-State Beef Stocker Unit. With this refocus of the facility, the Animal Identification Knowledge Laboratory at the unit was developed in 2005, where 24 receiving pens were also built for the unit to hold 300 head of cattle at 500 pounds each. The unit added eight new pens in 2016, which helped to increase the current number of cattle to approximately 350 head.

The beef stocker unit at K-State is a multi-use facility for receiving and backgrounding young cattle that have been weaned, and to keep these cattle until they have reached 800-900 pounds. The unit also collaborates with other departments within the College of Agriculture for student research in beef cattle nutrition, health and management practices.

“We have a great program for our students to work at the unit and be involved in their research projects and then give them beef production experience at this unit,” Blasi said.

Some of the facility’s operations consist mainly of feeding and collecting research data on the cattle, continuous maintenance of the unit by upgrading pens and building new fences.

The cattle are received from commercial feeder companies that the university has collaborated with to allow the university to conduct and develop research trials. These companies send the cattle to the stocker unit, and then the university charges a price for feed, vaccination and yardage expenses.

The primary company that the unit is in collaboration with is Pratt Feeders in Pratt, Kansas, but they have also received cattle from southern New Mexico, northern Texas and northern Montana.

Throughout the year, there are about 16 loads of cattle delivered to the facility that spend a few months in the receiving pens, and then transfer onto grass pastures. From there, more research trials are able to be conducted quicker with the continuous deliveries to the facility.

This commercially-produced beef is still owned by those companies and the cattle are transported back to them after reaching the optimum weight at the stocker unit, and the meat is not sold on K-State’s campus.

Editor’s note: This is the eighth in a series showcasing K-State livestock units. Next week’s story will feature the cow-calf unit. 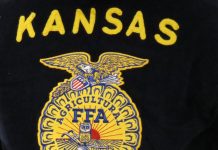